COHOES – Area activists are once again turning up the heat on a local waste incinerator.

Norlite in Cohoes came under fire for burning PFAS found in firefighting foam.

The company is now due for renewal of their permits, and more than 100 organizations are telling the Department of Environmental Conservation to deny them.

They call themselves Lights Out Norlite, a group of citizens concerned about the impact on public health from the burning of hazardous materials at the Norlite Plant.

The group delivered a letter to state DEC offices Wednesday, urging them to deny the pending renewal of Norlite’s permits. 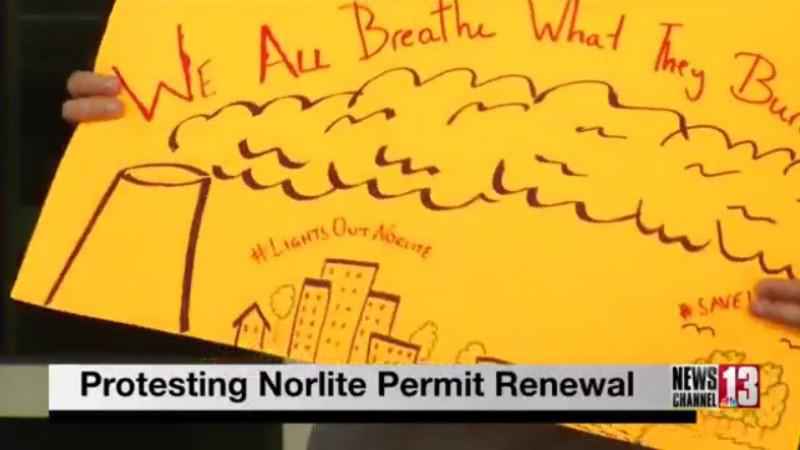 "People are scared that there is being dust on their children’s trampolines, that there’s these horrible smells that when they get their mail, they can’t even get it because of how choking it is," said Joe Ritchie with Lights Out Norlite.

Ritchie says he grew up at the Saratoga Sites Public Housing Complex, which he claims feels the brunt of the burning.

They’ve already succeeded in getting New York state to ban the burning of PFAS, but Judith Enck – former regional administrator for the EPA, says there’s more to be concerned about.

Hear her talk about what toxic chemicals she says are still coming from there, and why they’re technically shouldn’t be anything coming from there right now, by watching the video of Jerry Gretzinger’s story.

"Norlite operates a safe business in Cohoes that provides important environmental benefits to the community and excellent products to its customers and employs 70 people. We are confident that our operating performance, sound science and the rule of law — not stunts of victimization theater — will be determinative as we work with the New York State Department of Environmental Conservation to renew our environmental permits. Norlite complies with its permits and operates well within strict regulations to protect public health and the environment. Our facility and our operation do not pose a risk to the community. The facts are that combustion is a highly regulated and safe means of energy recovery and waste destruction, and Norlite’s technologies result in emissions that are orders of magnitude below regulatory limits. Because the facts do not align with their political agenda, activists intent on closing our facility resort to fear and lies to falsely suggest that the community is at risk. Their tactics would be easily dismissed as absurd if not for the threat they pose to the jobs of 70 people and the security of their families, as well as the production of a LEED-certified lightweight aggregate that is the product of choice for builders and consumers who are concerned about sustainability, carbon emissions and energy efficiency. While we share any responsible person’s legitimate concern for the health of their community, the activists show no concern for facts or science. They are asking DEC to evaluate our applications for permit renewals based on a narrow political agenda that does not serve the broader interests of the community. We trust that the DEC will see through these tactics and base its determinations on science, technology, and a faithful application of the laws of New York State. That is in the best interest of all of us"