Albany Mayor Kathy Sheehan is looking at another four years in office after a decisive win Tuesday night.

Sheehan says tackling issues like policing and staffing will be a difficult task post-COVID. However, she says she’s excited to make investments in some of the city’s neighborhoods with COVID relief money.

"It was a great process, but now it’s time to get back to work," said Sheehan on Wednesday.

Sheehan says she’ll now face balancing voters’ desire for more police oversight and a pressing staffing issue in the police department. Her plan includes graduating more officers every few months, an effort she says has been hampered by COVID.

"We’ve been swimming against the tide. Now, we are back up to being able to hire fully vaccinated new officers, fill those classes and get them moving through more rapidly. We need to ensure that we fill those positions in order to have more police officers able to meet the demands of our residents to see more police out on the beat out on the street, knocking on doors, interacting with our residents," said Mayor Sheehan.

Part of that is tackling a shortage of dispatch workers. A police source tells NewsChannel 13 Albany’s dispatch is in serious need of staff. Sheehan says the city is working to train seven more people to work in the dispatch center. The mayor says it hasn’t risen to the level where the city would remove hiring priority for Albany residents.

"That is an option if it becomes necessary, but again, that has not been the gating item with respect to the challenges that we’re seeing in dispatch. We are experiencing what employers were experiencing before the pandemic, and it’s been exacerbated by the pandemic, which is a labor shortage," she said.

Sheehan is also hoping to build voters’ trust in the police department. She says newly-passed Prop 7 will build a bridge to help the community make their complaints heard. Albany’s police unions strongly oppose the proposal and said Wednesday they are exploring legal options to fight it.

"The goal is to build a disciplinary matrix with the police department. Not an us versus them. But civilians want to have a say. They want to understand how these decisions are made," she said.

Despite these challenges, Mayor Sheehan believes the federal COVID-19 relief money Albany is tasked with investing will be transformative over her next term.

"I think that what we’re going to see over the next two to three years as we get this funding out into the community is really going to transform neighborhoods that have been historically challenged," she said. "We have unprecedented federal funding from the Rescue Plan that is going to allow us to strategically invest in neighborhoods that have seen underinvestment." 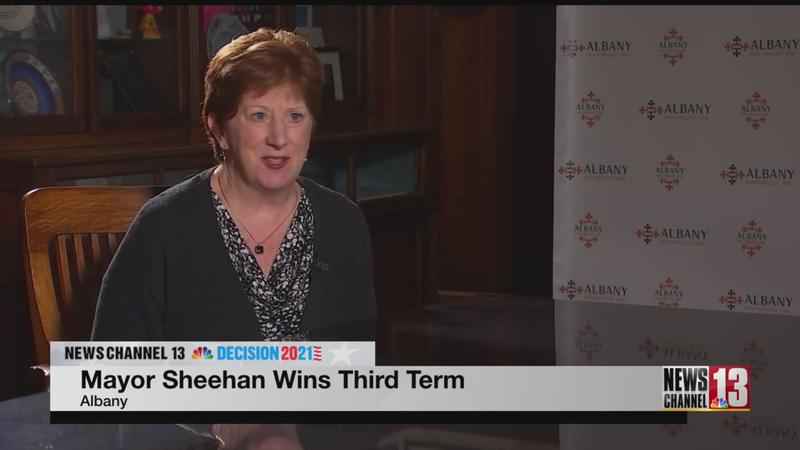 Sheehan will be sworn in for her third term on January 1.