QUEENSBURY – For nearly half a century, most Americans assumed Roe v. Wade was settled law. But the Texas Legislature and their governor had other ideas, and then nationwide protests followed.

"It’s still surprising that we have to pursue this but given what we see right now coming out of legislatures like in Texas, we have to defend it," said Wendy Johnston, a political science professor at SUNY Adirondack.

"A gathering like this I think is indicative of women’s engagement," Woerner stated. "And they want to understand the process. They want to know how to advocate for issues that matter to them."

Woerner says New York has earned its distinction as the progressive capital of the nation when it comes to women’s rights — listing paid family leave, pay equity, child care funding, and the codification of Rose v. Wade to make her point. 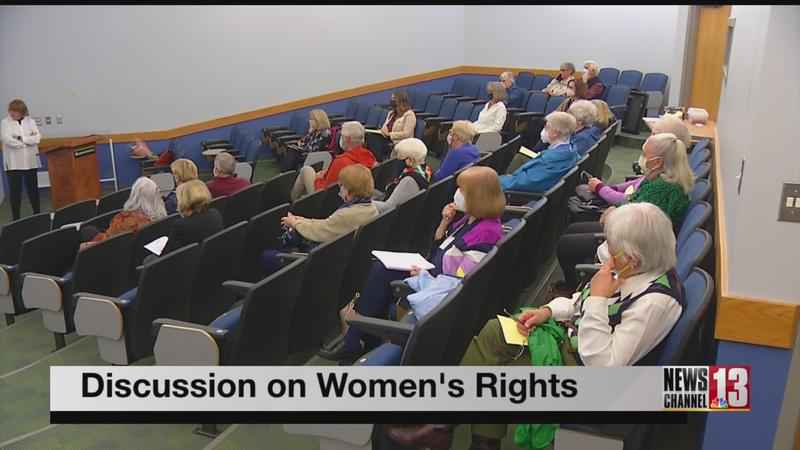 But she’d also like to see more progress, beginning with the passage of the Equal Rights Amendment.

"As a woman, I’m very frustrated that we are still having these conversations," she said.

That frustration served as the impetus for a gathering at SUNY Adirondack. The goal was to make women aware of what their rights are in order to educate them, so they can further their crusade, and to remind them of how far they’ve already come.

That New York State finally has a female governor — Kathy Hochul — and that the state Senate is also led by a woman — Sen. Andrea Stewart-Cousins — provides comfort and hope to many women. Woerner says she expects her constituents to remain engaged.

"I’m just sensing in general that we are moving into a time when the electorate generally speaking is engaged," Woerner asserted. "They are caring about how their government represents them and I think that’s great."