Are your kids drinking the low-fat milk given to them at school?

During lunch at Schoharie Elementary School, the students line up one by one and grab their choice of food and milk.

Most kids go for chocolate milk, rather than the other option available, 1% low-fat milk.

"If you’re going to have milk, you might as well add sugar to it I guess," Vanessa Reed said.

RELATED: Is whole milk as fattening as people think? 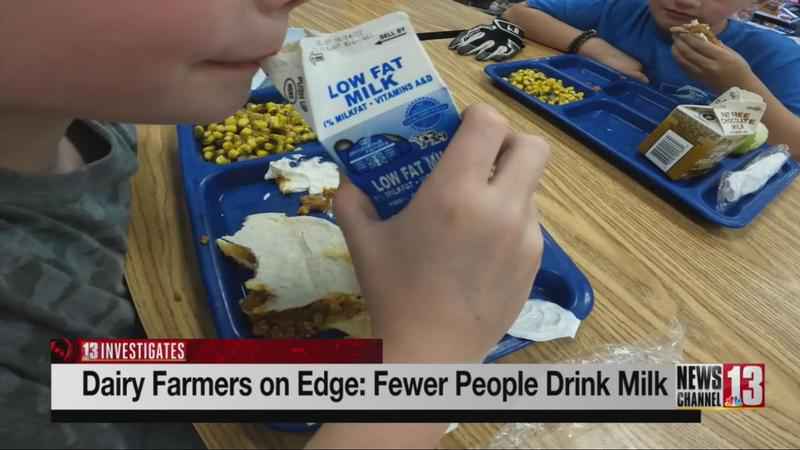 Reed works in the school lunch line. She said kids don’t have to take milk, but most of them feel like they have to.

"We remind them, ‘Hey you forgot your milk.’ There are a few students that chose to say, ‘I don’t want milk today’ and we’re like ‘OK.’"

While sitting in during lunch, 13 Investigates did notice most of the kids drank at least half of what was in the milk containers.

Benjamin Borst is a student who eats cafeteria food regularly. He said he would like whole milk better.

"It just tastes better," he said.

New York Assemblymember Chris Tague (R – Schoharie) is pushing for whole milk to be offered in schools again. After the Obama administration essentially banned whole milk as part of the push to offer healthier food options, which started in 2010.

Tague said this could help the small dairy farmers stay in business.

"If we continue to go down the road that we are, the only dairies that are going to be left are dairies that milk 1,000 cows or more."

The number of dairy farms in the nation has been shrinking for decades.

According to the United States Department of Agriculture, there were 74,000 licensed dairy herds nationwide in 2002. That number dropped to 34,000 in 2019.

"Farmers have never gotten rich, they’ve done it because they’ve made enough money to survive," he said. "But when you start really losing money and not being able to pay the mortgage, you just have to decide it’s time to go."

Two registered dietitians, one that works with schools, said having whole milk has a place in school lunch.

"I think kids want choice. They’re happier when they have a choice and variety in the lunch line," Claire Groudine said, a registered dietitian for BOCES Shared Food Service.

"I think having more options in a school breakfast and school lunch is good because it exposes kids to different types of foods and flavors, but it also helps to prevent fear over certain foods," Kameron Rowe said, a dietitian and assistant professor at Russell Sage College.

Would fewer dairy farmers in the country mean milk prices, and other dairy products, at the grocery store, would go up? The answer is no.

Kajal Lahiri, an economics professor at the University of Albany, said milk production has not slowed down at all.

Small dairy farms are being replaced by huge dairy farms. Lahiri said those farms can produce the same amount of goods with fewer resources, but those little farms are considered to be the backbone of rural America.

They are one of the few employment opportunities in small towns.

"You can’t afford to lose these kinds of businesses, these rural-based businesses. You just can’t," Lahiri said.

However, Lahiri said inflation is causing milk and pretty much all items at the grocery store to soar. However, not because there are less dairy farmers.