FORT EDWARD – In two separate communities folks are mulling over the possibility of merging their school districts together. If that were to happen, tiny Fort Edward would be annexed by nearby South Glens Falls.

At Monday night’s public hearing portion of the Fort Edward School Board meeting, not a single person spoke in favor of the proposed merger.

"I ask you, I plead with you, I’m coming to you with God before me saying don’t do this. It’s not what the community wants," asserted Megan Munoz, a village resident.

It is however what consultants have been studying over the past year. If it were to happen, Fort Edward students would have access to more courses, more extra curricular activities, and more athletics.

"It makes no sense to me to take a small town and ship your kids off to a big school district," said Joseph Penello, who will soon have three children attending school in fort Edward. 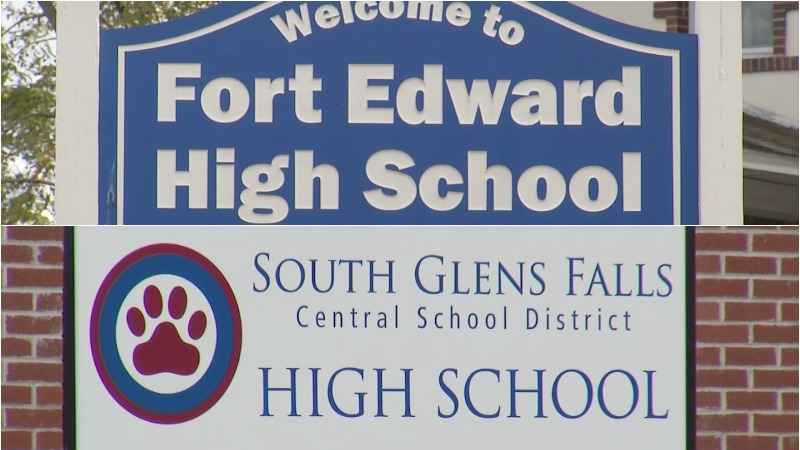 If the merger goes through taxpayers would save $1.4 million in salaries and benefit costs after 11 teachers and one superintendent are eliminated.

"Everybody is telling you what you’re going to gain but what are you giving up?" Penello asks rhetorically, "You’re giving up the ability for your kids to grow up in a community where the teachers care about them."

Taylor Boucher is a Fort Edward alum who says she’d like to see her little brothers get the same small town education that she got.

Long time resident Susan Sheehan, who did not speak at Monday’s meeting, has a different take on the merger possibility.

"I think it’s wonderful personally," she says, "I’m a single homeowner and the financial benefits for my taxes are significant. I also understand folks who have kids in school here and don’t want to lose that camaraderie that those children have established with their classmates and their teachers."

If the proposal moves forward, both school boards will have to vote separately on October 6.

If they vote yes, referendums would be scheduled for November 17 in each district. Then there would be a final binding vote in February 2022.

If it passes, the new district would become effective in the fall of 2022.