Jacob Klein was indicted by a grand jury Monday for second-degree murder. He’s accused of killing 35-year-old Philip Rabadi at his home on Miller Road in New Scotland on April 13.

NewsChannel 13 obtained court documents detailing the circumstantial evidence police gathered against Klein. They include statements from neighbors, who saw a man by Klein’s description around the home on Miller Road the day of the murder.

Police say Klein and Rabadi’s wife, Elana Radin, were in a relationship years ago.

According to the documents, she told police right away that she had received a concerning email from Klein before she married Rabadi in September 2021. 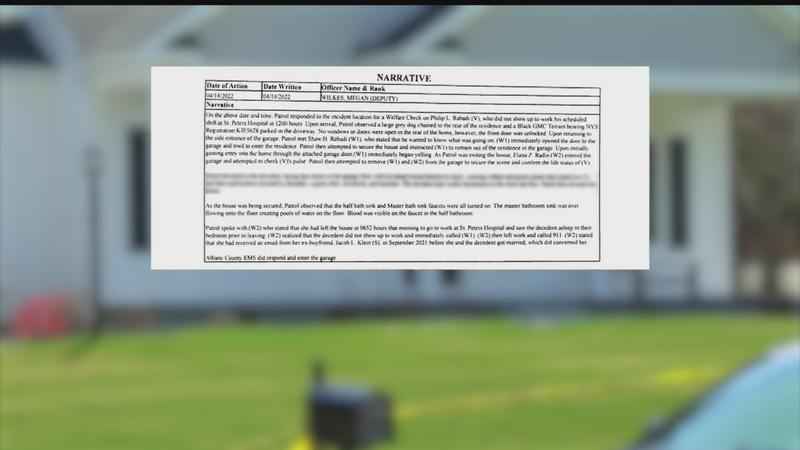 The documents show the elements police used to make their circumstantial case against Klein.

The file has documents from an Enterprise Rent-A-Car location on Central Avenue in Albany that shows a man by the name of Jacob Klein renting a white truck on April 11, two days before the murder.

One document shows a vehicle with the same license plate detected in Albany by a plate reader at 7:31 a.m. on April 13, the morning of the murder.

The file also includes a statement from a neighbor who says they saw a white truck of the same make at the Rabadi home while on a walk just after 7:00 a.m. The neighbor describes a man about 5’8", Klein’s height, walking toward the Rabadi home. She told police the man was carrying papers in his hand and dressed in dark clothing with a surgical mask.

The file also details how Rabadi’s father and wife met police at the home when he did not show up for work at St. Peter’s Hospital for his shift at noon, where the couple worked as physician assistants. According to documents, the family found Rabadi bound and stabbed on the floor.

As police were securing the home, they report finding two bathroom sinks running, one overflowing onto the floor and one with blood on the faucet.

Documents show police considered the suspect was at risk of fleeing the U.S. as he made his way to Tennessee the day after the murder. Klein was arrested in Virginia two days after the murder.

Klein lived in Wirtz, Virginia, but has ties to Albany. He attended Albany Academy, where friends called him "Larry."

NewsChannel 13 is also following how family and friends are honoring Philip Rabadi with a fund at Albany Medical College, where he studied to be a physician assistant. The fund is about to hit $50,000 in donations, at which point it will be endowed in perpetuity to help future PAs make a difference as Philip did. To donate, click here.