The Democrat said legislative leaders also agreed to modify the state’s bail laws, making it easier for judges to jail criminal defendants who were repeat offenders or used firearms.

Lawmakers planned to begin voting Thursday evening on the budget, which was due April 1 but had been held up by last-minute policy and spending disagreements. Senate Leader Andrea Stewart-Cousins said the “hope” is to wrap up work Friday.

The budget was delayed in part over disagreements on whether to roll back parts of a landmark 2019 law that largely did away with cash bail for nonviolent offenses.

Centrist Democrats had demanded changes out of concern about an uptick in violent crime during the COVID-19 pandemic. 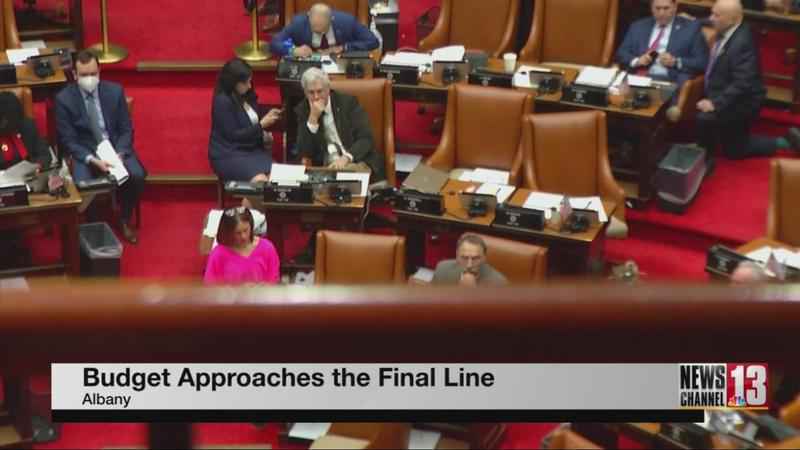 Some specifics of the bail changes are still being worked out, but elements of the deal would let judges require more people to post bail to gain their freedom while awaiting trial if they had repeatedly been arrested for similar crimes, Stewart-Cousins said.

Legislative leaders have also agreed to Hochul’s plan to earmark more than $600 million in state funds to help the NFL’s Buffalo Bills construct a new stadium.

Hochul had disrupted the budget negotiations by introducing the stadium proposal only in recent weeks, and some fellow Democrats were upset by the size of the government subsidy. With all state and county money for construction and operating costs included, the government contributions to the stadium will exceed $1.1 billion.

Many parts of the budget deal were aimed at easing the financial burden on segments of the public as the state continues to recover from the pandemic, while dealing with inflation and rising prices.

The fuel tax is being suspended from June 1 until the end of the year, and the state is talking to counties asking them if they will consider doing the same, Hochul said.

“The cumulative effect is very impactful for people as they go to the pump and have that sense of stress in their in their chest when they think about the cost of the gas,” the governor said at a news conference.

Hochul said lawmakers will also pass a major expansion of the state’s child care subsidies, with a $7 billion investment over four years.

The state would spend $7.4 billion over several years to give a $3-per-hour raise to home care aides, who bathe, feed and provide other non-medical services in clients’ homes. Aides generally are private employees, but the state Medicaid program funds about 90% of their services.

Right now the aides make $13.20 an hour in most counties for work that helps keep people out of nursing homes, according to advocacy groups. The activists said the low pay is driving aides to quit.

The conservative-leaning Empire Center for Public Policy, a think tank, challenged the proponents’ analysis and warned the pay increase would be costlier than anticipated.

The budget also includes $1.2 billion in bonuses for other healthcare workers, aimed at keeping people in the industry after a grueling two years of the pandemic.

Provisions in the budget would also make liquor and wine available for take-out and delivery for three years, reviving a practice instituted during the pandemic to help struggling restaurants.

The new provision would allow businesses that serve alcohol on premises to offer it to go as long as the purchases include a “substantial food item.” Beverages must have a secure lid or a seal, according to the bill.

Part of the budget talks had revolved around whether to make changes to Kendra’s Law, under which authorities can require people with serious mental illness to attend outpatient psychiatric treatment as a condition for living in the community.

It wasn’t immediately clear Thursday how that law might change.

New York passed that law on a trial basis in 1999, when 32-year-old Kendra Webdale was pushed in front of a subway train by a man living with untreated schizophrenia. The law is set to expire June 30 unless legislators grant yet another extension.

The effort to tweak the law now comes in the wake of the death of another woman pushed in front of a subway train in January — 40-year-old Michelle Alyssa Go of New York. Police said the man accused of fatally shoving her was homeless and had a history of “emotionally disturbed encounters.”

Ruth Lowenkron, director of the Disability Justice Program at New York Lawyers for the Public Interest, said she’s concerned that lawmakers will weaken due process protections.

“This over-reliance on criminalizing mental health and on involuntarily commitment creates more trauma for individuals with mental health,” Lowenkron said.

Hochul and legislative leaders have been negotiating for months on the budget, which has often served as a vehicle for passing major policy legislation over the decades. Budget negotiations in New York once stretched into the summer months and were shortened under former Gov. Andrew Cuomo’s administration — although last year’s budget passed April 7.