NewsChannel 13 is looking at the lasting impact rising gun violence is having on the families of victims, like 15-year-old Destiny Greene, who was caught in the middle of gunfire and killed in May.

Destiny Greene’s grandmother Fidelia Rodriguez spoke exclusively with NewsChannel 13. She says it only took a second for her granddaughter to be shot, and 90 seconds for NewsChannel 13 to cover the shooting. However, she wants people to know that her family is left with the rest of their lives to pick up the pieces.

"She had a good heart, she was always out for the underdog, in school, she stood up for those that were being bullied, more than I even thought about it. I found out a lot of it after she got killed," Rodriguez said.

Destiny’s life was cut short in May, when someone opened fire on a car she was sitting inside with family and others, just blocks from the Governor’s Mansion. 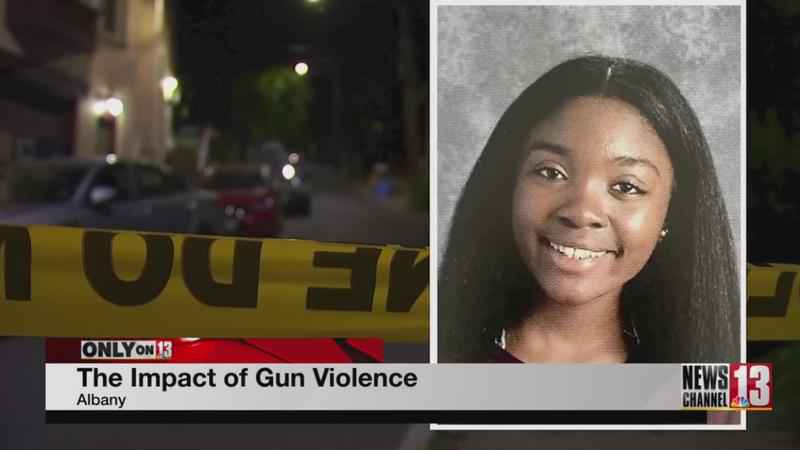 The Shaker High sophomore had a tight bond with her grandmother, who looked after Destiny at home when she was a baby and her parents were working.

"You’re never supposed to bury your children, but can you imagine, sitting in the church, seeing your grandchild in repose? That’s the worst feeling in the world," she said.

That was only the beginning of the impact Greene’s death would have on her close-knit family.

1/3 This is Destiny Greene as a child. She was caught in the middle of gunfire and killed in Albany last May at just 15 yrs old. Tonight her grandmother shared the toll it’s taken on her family’s bond: https://t.co/wIZKAfv9rx @WNYT pic.twitter.com/zr3erlqsHI

3/3 No arrests have been made in Destiny’s murder. Albany Police say the investigation is ongoing.

"People have no idea, when someone gets killed, violently, for no reason, she did nothing to be killed, what it does to a family," Rodriguez explained.

She says the family’s bond has been shattered, with many of them no longer speaking. Some are blaming others for why Greene was caught in the gunfire.

"I want people to know that when you think of pulling out a gun, to satisfy whatever it was that you had going on, you need to think twice. You’re not just going to take that person’s life from this Earth, you’re going to shatter, destroy, damage a whole family," she said.

Rodriguez says the damage sets in after the shooting happens, and the headlines go away.

"Now my family is broken, because of some person having no value on someone’s life that they don’t even know," Rodriguez said.

Her family is united, though, in wanting justice for Greene, asking anyone who knows something to come forward.

"I think that closure would begin our healing. I think I’m going to grieve for the rest of my life, because she was my baby, she was the last one. You go on because you have to," Rodriguez said.

No one has been arrested in Greene’s murder. Back in June, police hinted at a press conference that they might be close to an arrest, but Tuesday they said the investigation into who killed Greene is ongoing.