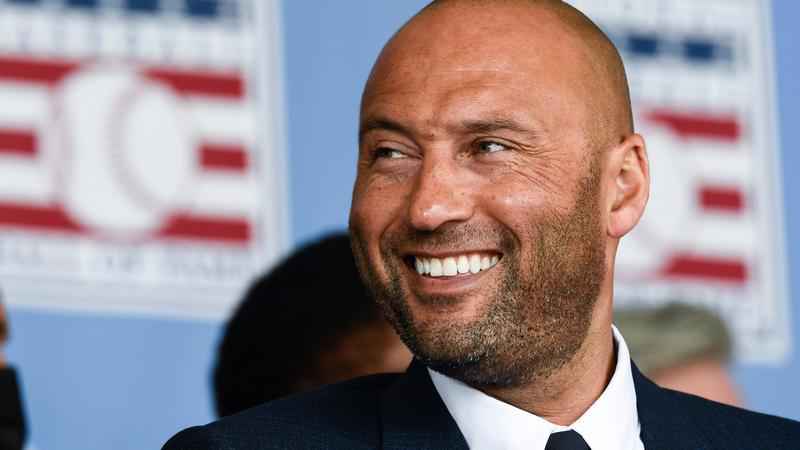 Hall of Fame inductee Derek Jeter, of the New York Yankees, watches a video during an induction ceremony at the Clark Sports Center at the National Baseball Hall of Fame, Wednesday, Sept. 8, 2021, in Cooperstown, N.Y.[AP Photo/Hans Pennink]

Derek Jeter played 20 major league seasons, is a five-time World Series champion, a 14-time All-Star, and is now a Hall of Famer.

Until now, playing shortstop at Yankee Stadium was the grandest stage Derek Jeter had ever been on. But there he was Wednesday afternoon, almost two years after being elected, surrounded by about three dozen of the best to ever play the game and tens of thousands of adoring fans, giving his Hall of Fame induction speech.

“I wanted to make all of you behind me proud,” Jeter said, referring to his fellow Hall of Famers gathered on the stage. “Not of statistics. Proud of how I played the game, how I carried myself, and how I respected the game and those that came before and after me.”

Jeter one of the best hitters of all time. But part of his appeal was his reluctance to talk about himself. It was always team first. He stayed true to form at his induction ceremony.

“The one common thread with all of us here on stage is we understand that there’s no one individual bigger than a game. The game goes on. It goes one because of the great fans we have,” he said.

This is a first for the Hall of Fame. Never before has there been an induction ceremony on a Wednesday afternoon in September. If this was held on the last Sunday in July as these usually are, the Hall of Fame says they would have set a record for attendance.