Hazmat situation over at Tobin’s First Prize demolition in Colonie

A hazmat situation in the area of where the old Tobin’s First Prize is being demolished ended Monday just before 5:00 p.m., and people in the area can now go outside safely.

Police say this started just before 1:00 p.m. Monday, when the company tearing the plant down for the last few weeks, Jackson Demolition, hit an ammonia pipe at that plant. Fire officials said three to four people were initially sickened by the smell, and one went to the hospital to have a headache evaluated.

"[They] went to pull out one of the coils, and that’s when they discovered a leak. What was brought to their attention prior to demolition was, all these pipes are drained and they were supposed to be empty. Obviously it wasn’t a fact," said Michael Romano, Deputy Fire Coordinator for the Town of Colonie. 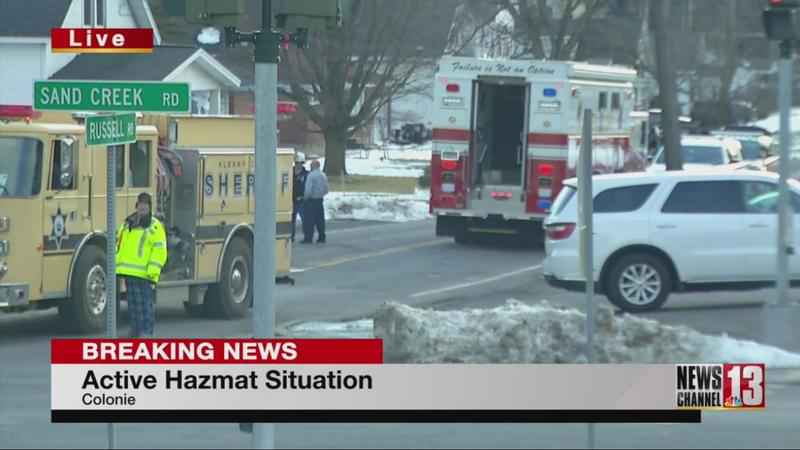 A professional from the company along with a hazmat team out of Albany suited up to take care of the problem inside.

Firefighters helped create a "water curtain," so the cloud of ammonia didn’t get out and hurt anyone.

"Our plan was to utilize a water curtain to control the hazard if there was to be a hazard, the cloud, the vapor cloud we were worried about. Fortunately, there was a very minor leak left once we pulled the pipes out," Romano explained.

Colonie police were also using a drone to make sure that the ammonia cloud was under control and safe.

While this was going on, residents in a one-mile radius were asked to shelter in place, and close all doors and windows. Albany County sent out a reverse 911 call to warn affected residents.

Neighbor Tim Rizzuto arrived home for lunch to find his street closed and a bad smell.

"There was a really strong smell and I guess, I assume it was ammonia, I didn’t know what it was at the time. Came home and when I went back to work about half an hour later, that smell was still in the air," he said.

NewsChannel 13 reached out to Jackson Demolition to confirm what happened and ask if any workers were among those sickened. We did not immediately hear back.