Hochul, the state’s first female governor, is proposing a $10 billion plan to grow the state’s health care workforce by 20% over the next five years, saying the pandemic worsened long-simmering staffing problems.

That includes more than $4 billion to support wages and bonuses for workers in health care — a sector now suffering from a high burnout rate — and $2 billion for improved health care infrastructure.

Hochul spoke before a limited, socially distant audience in the Assembly chamber at the New York State Capitol in Albany amid the worst surge in coronavirus infections since the virus first hit the state in the spring of 2020. 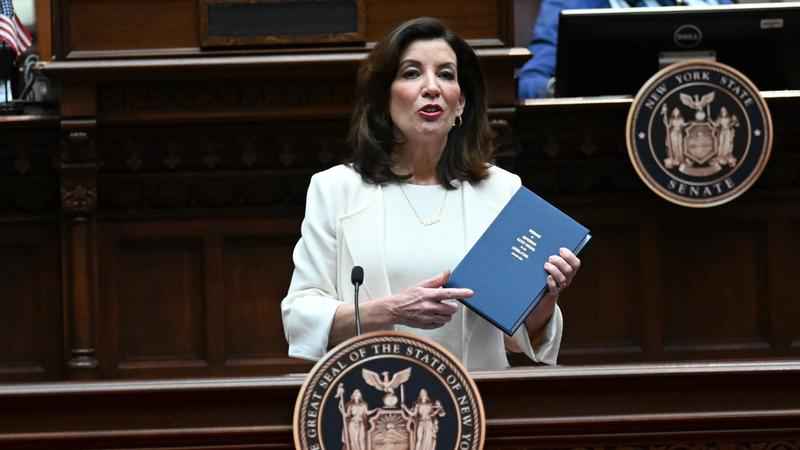 "We will fight like hell, not for turf, not for credit, but for New Yorkers," Hochul said.

Assembly Speaker Carl Heastie was absent and quarantining following a pair of rapid tests indicating he may have COVID-19.

More than 10,400 patients with confirmed COVID-19 were hospitalized statewide as of Monday: a 69% increase from the previous Monday. Hochul, who became governor when Andrew Cuomo resigned in August, said her administration’s "laser focus" is keeping kids in schools and businesses open.

The Democrat also announced initiatives including a proposal to invest $1 billion in electric vehicle infrastructure in coming years and up to $500 million in offshore wind port infrastructure to meet the requirements of a sweeping state law calling for 70% of electricity from renewable sources by 2030.

Such projects will power one-third of New York City with wind, solar and hydropower, Hochul said.

She’s also proposing $2 billion for road and bridge repairs, with a focus on replacing structures vulnerable to flooding.

To help ease the economic pain of the pandemic, Hochul wants to speed up a planned phase-in of $1.2 billion in middle class tax cuts that began in 2018. She also wants $1 billion in property tax rebates for more than two million middle-and low-income individuals.

Hochul proposed nearly $1 billion in funding for tax credits, seed funding and reduced interest rate loans for small businesses. She wants to boost broadband subsidies and access by drawing on $1 billion in public and private investments.

And with New York’s eviction moratorium set to expire mid-January, Hochul wants to offer free legal assistance for upstate New Yorkers. She said the state could help stave off homelessness through a five-year, $5 billion plan to build 100,000 affordable homes in urban and rural areas.

Hochul, who’s running for governor this year, has vowed to restore trust in state government.

She wants to replace the state’s ethics enforcement agency, which recently has tussled with Cuomo over millions of dollars he earned writing a book while in office. She also wants to limit certain statewide elected officials, including the governor, to two terms and put a ban on them earning outside income.

Other initiatives including making the state’s tuition assistance program available to part-time students and a Jails to Jobs initiative to help incarcerated people get and keep employment.

New York should address the uptick in gun violence by boosting funding for community prevention programs and gun-tracing efforts with neighboring states, she said.

Hochul later this month is set to release her own one-year budget proposal. Lawmakers must pass a state budget by April.

The Democratic-led Legislature and Hochul’s administration is also face pressing decisions on new legislative and congressional maps, the launch of pot sales and calls for increased pandemic aid for landlords and undocumented workers.

Other Democrats propose a future mandate on childhood COVID-19 vaccination, parole reform, a ban on landlords from denying a lease renewal under most scenarios and a law automatically clearing the records of many convicted of crimes.

"We have to give people a reason to choose New York, rather than a dozen more reasons to leave," he said.