Hochul: Age to buy guns should be 21

Gov. Kathy Hochul wants to raise the legal age to buy a gun to 21, or at least restrict people under 21 from buying an AR-15.

Hochul made the announcement while speaking at a meeting of the Interstate Task Force on Illegal Guns in East Greenbush.

Her comments come one day after 19 kids and two teachers were killed at a Texas elementary school. 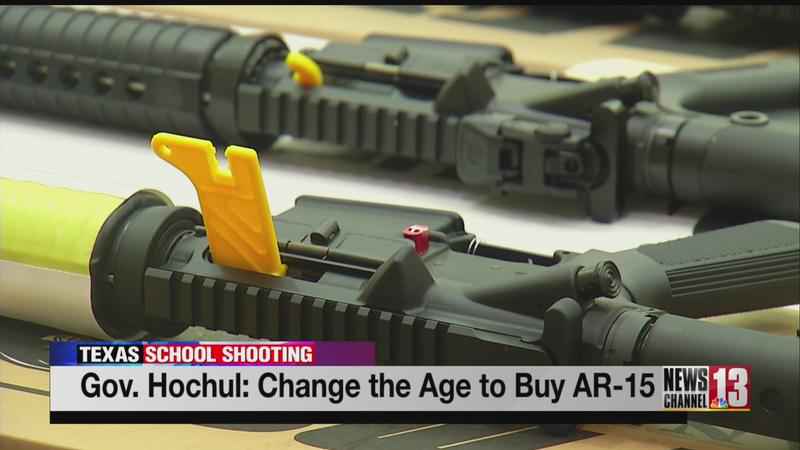 This shooting comes less than two weeks after another deadly mass shooting at a Tops Supermarket in Buffalo.

Hochul said she is going to work with the state legislature to change the age to 21.

"Am I supposed to just leave all the flags at half-mast? They’re still at half-mast from Buffalo," said Hochul.

However, New York republican assemblyman Matt Simpson said rather than focusing on guns, there needs to be a rational, reasonable discussion about the state of people’s mental health.

He said he wants there to be a comprehensive focus on how to better serve mental health resources and the impact it could have.

“I’m not going to support it. Right now. I think it’s focused in the wrong direction. We’re focusing too much on inanimate objects that somebody can steal a firearm from a neighbor or break into a house. Why would somebody take those chances? Break the laws," Simpson said.

"That’s an infuriating response. It’s a bunch of bull. Using mental health as an excuse to not get at dangerous guns and get them away from people is an attempt to really do nothing," he said.

Hochul is also calling for state police patrols to visit schools every day from now until the end of the school year as a way to let parents know their kids are safe each day.

"They have enough to worry about. Let them know that the state police and their local law enforcement are going to be there to protect them," said Hochul.