Hochul, who is set to take the reins of power in just under two weeks, gave her first public remarks Wednesday – one day after Cuomo’s announcement that he would step down rather than face a likely impeachment trial over allegations that he sexually harassed several women, including one who accused him of groping her breast.

Hochul will be the first female governor of New York.

"While it was not expected, it is a day for which I am prepared," said Hochul, a western New York Democrat who has held multiple offices but is unfamiliar to many New Yorkers. 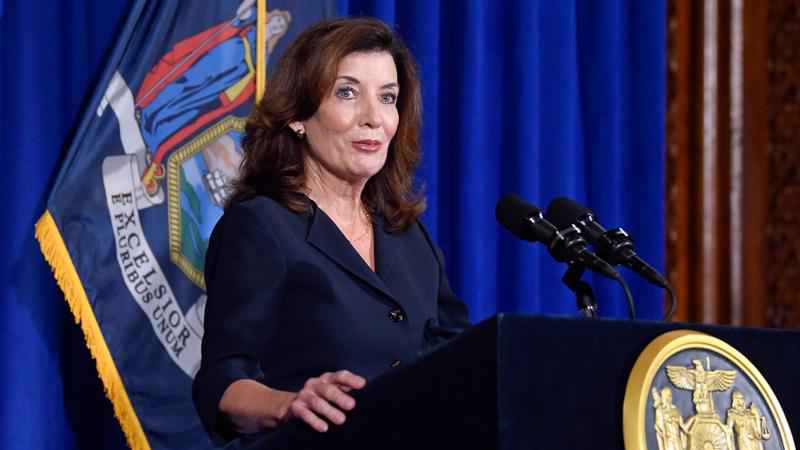 Hochul said she did not ask for the 14-day transition, and would have been ready to take over now if needed.

She mentioned she plans on building her staff in the coming weeks, and is meeting with current and potential cabinet officials.

Hochul says she will lay out a vision for the state in an address shortly after she’s sworn in.

"People will soon learn that my style is to listen first, then take decisive action," said Hochul.

She acknowledged the tough challenges ahead, including the continuing threat of COVID as schools prepare to start again and businesses try to welcome workers back safely.

"The delta variant is still raging. It will take all of us to defeat it," she noted, while reiterating that more people need to be vaccinated.

She also explained the administration no longer has the same executive powers for the pandemic that had been granted to Cuomo and were later revoked.

The incoming governor also tried to distance herself from Cuomo, saying she and the governor don’t typically work together.

"I think it’s very clear that the governor and I have not been close, physically or otherwise, in traveling the state, and I do not spend much time in his presence or in the presence of many in the state Capitol," said Hochul.

A reporter did ask Hochul if she would consider pardoning Cuomo.

"I’m going to tell you right now, I’m talking about my vision for the state of New York. It’s far too premature to even have those conversations," she replied.

However, she did vow to make sure there was a cultural shift in her administration.

"I’m going to stand here at the end of my term, whenever it ends. No one will ever describe my administration as a toxic work environment," she asserted.

According to the state’s order of succession, Senate Majority Leader Andrea Stewart-Cousins would take on the duties of lieutenant governor if Hochul were to become governor immediately. However, Hochul could still pick someone else for that job.

He released this statement:

"With Governor Cuomo resigning in disgrace, our next Governor, Kathy Hochul, will soon be facing enormous challenges. She deserves the opportunity to confront these challenges with a clean slate, and with the support of individuals who are not besmirched and compromised by ties to this dark, corrupt chapter in our state’s history.

With this in mind, I am calling for the immediate resignation of state agency officials with direct ties to the soon-to-be former Governor and the many scandals that have plagued state government. Close Cuomo allies like Department of Health Commissioner Howard Zucker and Superintendent of the New York State Department of Financial Services Linda Lacewell directly aided Andrew Cuomo’s misdeeds and have forfeited the right to serve the people of New York.

Make no mistake: the cover-up of nursing home deaths, the gross misuse of state resources for the writing of a book that personally enriched the Governor, and the cover-up — and enabling — of the Governor’s sexual harassment of young women, would not and could not have happened without these Cuomo appointees and other loyalists who are still employed by the people of New York they have misserved.

To ensure a fresh start for New Yorkers, these individuals should resign immediately or be removed from the state payroll by the incoming Governor."