Jeter’s HOF induction is a boom for Cooperstown

Derek Jeter’s Hall of Fame induction is not only a celebration of one of the greatest Yankees ever, it’s a time for the community of Cooperstown to put its best foot forward, welcoming tens of thousands of fans they hope to turn into repeat visitors.

Mickey’s Place has been a home base for Cooperstown for three decades. Owner Vinny Russo stocks merchandise for just about every pro team in the country — minor and majors. This is a major week for him, especially with Derek Jeter’s induction.

"We have a whole display in the front of the store of official Jeter merchandise," Russo said. "So he might take a look at it."
Not having an induction ceremony last year because of COVID was like a year without Christmas for Cooperstown businesses.

"This is a tourism town," said Mark Deso of Sal’s Pizza. "We suffered probably more than most in 2020. We need this. A little September bump here in Cooperstown."

Deso and his co-owners at Sal’s are from Guilderland. They, like so many in Cooperstown, were thrilled to have the induction ceremony return this year. 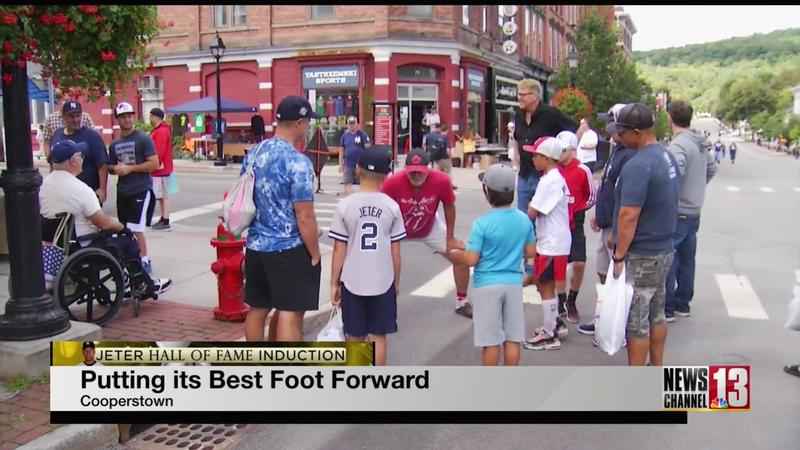 "It’s a huge deal. We went through a period of time where we weren’t sure if we were going to be able to do this or not. And that we can have it, there was a huge amount of excitement for Jeter’s induction," said Tara Burke of the Cooperstown Chamber of Commerce. "You know, the business community, like many other small town tourism-based economies, it suffered. And it’s just exciting to be back on the road to recovery, and this is a huge step in that road."

The year-round population of Cooperstown is 1,926. Wednesday, it was tens of thousands. Given the popularity of Jeter, before there was a pandemic, and before it was on a Wednesday, they expected a record.

"Oh no question, no question, it would have, particularly if you did it on a weekend in the middle of the summer like you traditionally would have. It would’ve been the all-time biggest," Russo said.

New Hall of Fame President Josh Rawitch is grateful fans could be here to see their heroes enshrined forever.

"What an amazing day that everybody really comes together and gets to celebrate the greats of our game," Rawitch said. "So for people to be able to spend a day out here with their family, it’s just something I think nobody will ever be able to forget."