Thursday marks the first anniversary of the attack on the U.S. Capitol, and many lawmakers are reflecting back on the moment.

Congressman Paul Tonko, D-Amsterdam, was inside that day alongside other lawmakers as the election certification process got underway.

"As we were in the early call of states, it became somewhat apparent that something unusual might be underway," Rep Tonko said.

Police moved quickly to evacuate lawmakers out of the building.

"We began to get commands from the police officers saying we had to get out the gas masks and wear them, to get on all fours and crawl through the gallery space," he recalled. "Ironically, we were seated at the far end of a rectangular shaped setting as to where we needed to exit, and so we were climbing under or over railings at each section of the gallery." 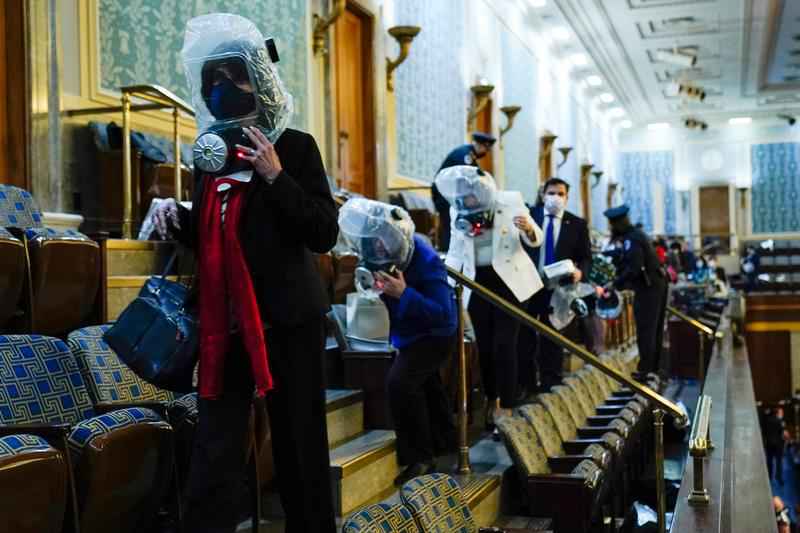 Members of Congress wear emergency gas masks as they are evacuated from the House gallery as rioters try to break into the House Chamber at the U.S. Capitol on Jan. 6, 2021, in Washington. (AP Photo/Andrew Harnik)[AP ]

As Rep. Tonko reflects back, he says it is important to make sure nothing like this ever happens again.

Congresswoman Elise Stefanik, R-Schuylerville, was also inside the Capitol that day and is reflecting. She released the following statement:

"On January 6, 2021, I strongly and clearly condemned the violence and destruction that occurred at the U.S. Capitol – just as I strongly condemned the entire year of violence and lawlessness that raged across our nation throughout 2020. Our nation owes a debt of gratitude to the U.S. Capitol Police for their bravery and heroism on that day and to those who sacrifice and serve in law enforcement every day across the country.

“It is unacceptable that one year later the American people still do not have answers as to why the Capitol was left so vulnerable and how to ensure it never happens again.

“Rather than focusing on improving the security of the Capitol and adopting all the recommendations from the U.S. Capitol Police, Nancy Pelosi and House Democrats are instead using their illegitimate partisan sham of a committee to shred Constitutional precedent and punish their political opponents. It is unprecedented, and it is dangerous.

“The American people deserve to know that the ONLY office that is off limits to this investigation is the Speaker’s office. The Speaker of the House oversees the Sergeant at Arms who, at her direction, has refused to turn over documents and communications related to January 6th. The fact is that Nancy Pelosi bears responsibility as Speaker of the House for leaving the Capitol so vulnerable despite multiple warnings and requests, and now she is responsible for the cover-up of that fact.

“As I stated on the House Floor as the Representative for New York’s 21st Congressional District, I believe that the most precious foundation and the most sacred covenant of our Republic is the right to vote and the faith in the security of our nation’s free and fair elections. I swore an oath to protect and defend the U.S. Constitution, and I stand by my objection to the electors of certain states based on the unconstitutional overreach by unelected state officials and judges ignoring state election laws. I am committed to working to strengthen our elections and rebuild that faith, so that our elections are free, fair, secure, safe, and most importantly, that they are according to the United States Constitution."

Senator Kirsten Gillibrand, D-New York, also took a moment to reflect this week. She told reporters she feels safe after the attack and believes Americans deserve answers about why the attack happened.

"The review being done by the House of Representatives is important. I think it’s important that we have all the facts and know what was happening behind the scenes with the President and his advisors that day," she said.

The Republican candidate for New York’s 20th Congressional District, Liz Joy, was outside the Capitol building that day. She released the following statement.

"Throughout 2020 the media described rioters, looters, burning businesses and beating people as peaceful protesters, despite the violence and destruction we all saw with our own eyes. On January 6th, the same media did the exact opposite and refused to cover the one million Americans who traveled to hear the President speak on election integrity and then left peacefully. Anyone who commits violent or destructive acts should be held accountable.”