ALBANY – NewsChannel 13 has been reporting on the problem of illegal dirt bikes and ATVs on Albany city streets.

City leaders worry that it’s only a matter of time before someone gets injured by illegal dirt bikes or ATVs speeding around.

There’s a new push in the city of Albany to crack down on the illegal bikes and ATVs.

People complain they are loud, dangerous and narrowly miss cars and people walking or children playing. 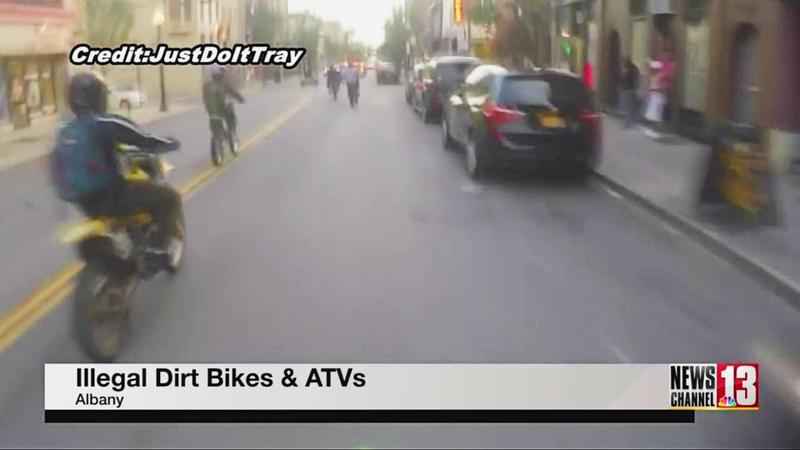 NewsChannel 13 asked Attorney Ryan Donovan what happens if someone on the street does get hit.

"Their recourse is limited," said Donovan. "I don’t want to generalize, I’m not sure, but it could be assumed that person probably doesn’t have insurance if it’s on a stolen bike. It probably also might not be a registered bike," said Donovan.

This issue goes hand in hand with another problem NewsChannel 13 has been reporting on. It’s widely known within the racing community that dirt bikes are being stolen all around the region. One racer in East Greenbush lost three bikes in one night.

Dirt bikes were riding on the street and sidewalks Friday night on Clinton Avenue. A video of a collision between a police car and a bike has been widely shared.

Police say the biker jumped on another illegal dirt bike and took off afterwards.

What if it stopped or delayed first responders from getting to an emergency?

"God forbid there was a life and death situation and timing was everything and they were unable to get to wherever they needed to be.

That person who caused the problem with the firetruck getting there could be liable under negligence," said Donovan.

The city of Albany has set up a hotline for people to call with information about where these vehicles are being stored or about any upcoming gatherings.