The New York National Guard honored its members’ role Friday in the response to 9/11, with a ceremony in Latham.

Five members of the state’s guard died as the towers collapsed.

Thousands of guard members rushed into Manhattan and stayed for months helping.

Members of the National Guard say 9/11 changed their service, with a whole generation of people in the Guard serving overseas and at the site of Ground Zero. 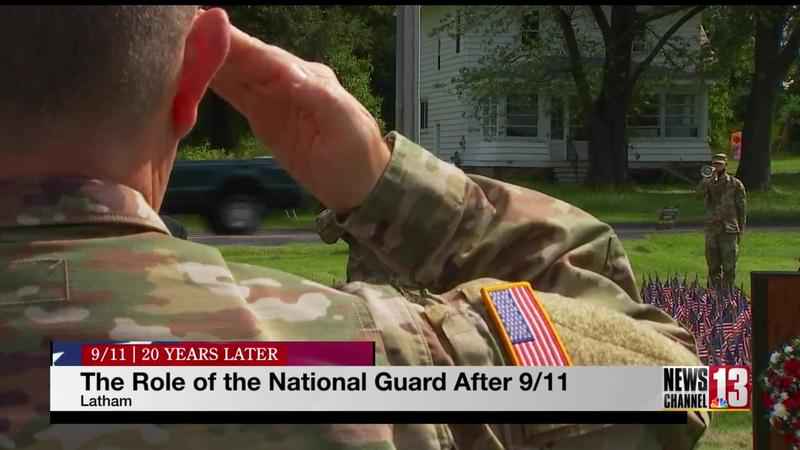 By the time the sun came up on September 12th, more than 2,000 members of the New York National Guard were helping in Lower Manhattan. Maj. Stephen Kitchen rushed down from Schenectady to help.

"On our way down, we had stopped to get tourist maps, because I’m not from downstate. I actually don’t know Lower Manhattan that well," Kitchen said.

Retired Maj. Gen. Joseph Taluto, the former adjutant general of New York, remembers what he saw, heard, and smelled when he arrived in the city.

"Down in Lower Manhattan, it did look like a war zone, and of course everyone was still frightened," Taluto said.

In the days following, they ushered scared commuters to their jobs in the city.

"Our role became predominantly security, in the early days. We were on tunnels and bridges, maintaining traffic flow into Manhattan, because we were afraid of car bombs or other kinds of attacks," Taluto explained.

Through their response, Guard members say the public came to see the role of the National Guard differently.

"The public just in general sees and hears about what the guard is doing, and they frankly are more aware," Major General Taluto said.

Before 9/11, people knew guard members as a reserve force. That perspective switched as they began to play an active role in the military’s response.

"The National Guard became relevant that day. We’ve been relevant ever since," Kitchen said.

Like many other Guard members, he can rattle off several deployments.

Guard members’ service came to be an important part of the military’s response, and never returned to what it looked like before that day.

However, for all of his sacrifice, Kitchen says he’s embraced the new definition of what it means to serve in the National Guard.

"I wouldn’t change a thing, actually," he said.

The New York National Guard likes to think it never quite left New York City, with many members still stationed in that area.