It’s definitely been feeling like summer in the Capital Region, and with that warmer weather comes insects.

NewsChannel 13 heard from viewers who said they’re seeing hundreds, if not thousands of gypsy moth caterpillars in North Country communities.

“They can strip a tree in less than a day,” said Jerry Carlson is a research specialist with the New York State Department of Environmental Conservation

People in Saratoga and Warren counties sent in pictures and videos of gypsy moth caterpillars covering sidewalks and eating trees, making some look completely bare. Plus, they can affect more than just foliage.

“The gypsy moth is mainly a nuisance pest although it can if gets to extreme outbreak conditions like this cause significant human health affects because the hairs are strong allergen responses, they actually have a toxin in them and some people can be severely affected,” Carlson said.

The last time we saw similar gypsy moth caterpillar outbreaks was between 2005 and 2008.

At that time, about 50,000 acres were heavily defoliated every year for three or four years. One year the damage affected 400,000 acres.

"We assume that part of the reason that were getting gypsy moths so heavily now is because the gypsy moth is capitalizing on either stress from its main host the oak trees or the improved synchrony of the time when the little caterpillars hatch from their eggs and when they feed on the foliage,” Carlson said.

So will DEC step in to minimize the impact of the caterpillars this season? Carlson said they’d rather not.

“We would prefer to see natural enemies take their natural course of events on these infestations, let the conservation of the environment work itself out,” he said.

Carlson said fortunately the caterpillars will be gone by June, which will still leave the trees some time to bounce back. 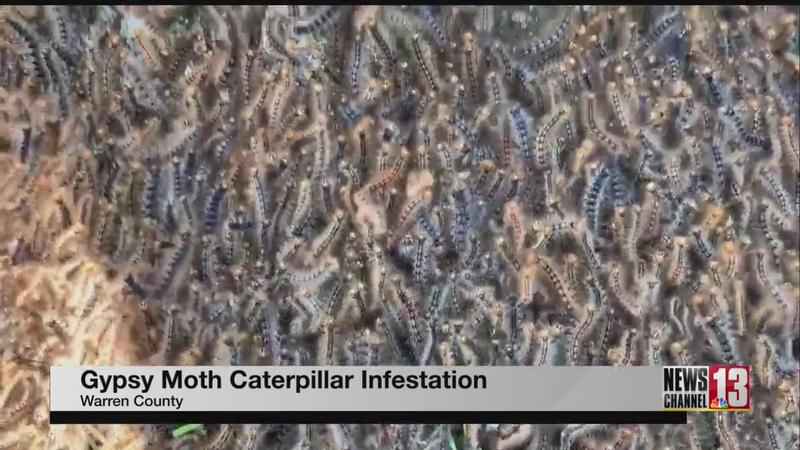 Stay tuned to NewsChannel 13 for updates on this story