Proof of vaccination, masks on the mind of business owners

SARATOGA SPRINGS – For the first time in 17 months, live music was performed Monday night at the Caffe Lena in Saratoga Springs. Those who gathered inside the legendary and intimate folk music venue that first opened in 1960 bore witness to kind of a scaled down pandemic version of a re-opening which included a polite, but not mandatory, request to wear a mask.

"We intended to open up at 100%," said Carolyn Shapiro, Caffe Lena’s House manager, "Then we thought, why don’t we just bring it back to 75%, there’s no need to stuff people into small rooms."

But before people could file into the small room, Caffe goers needed to produce a proof of Covid-19 vaccination at the door, otherwise no admittance.

"It definitely was difficult because we don’t want to exclude anybody from experiencing live music," Shapiro stated, "But we have such a small listening space and in order for us to work at full capacity, people share tables. And the only way that we could feel comfortable with people sharing tables was to prove if they’re vaccinated."

Meanwhile, a short distance away on Phila Street, at New Attitudes Consignment Shop, owner Ruth Boals was asked what impact she thought a mask mandate might have on business. 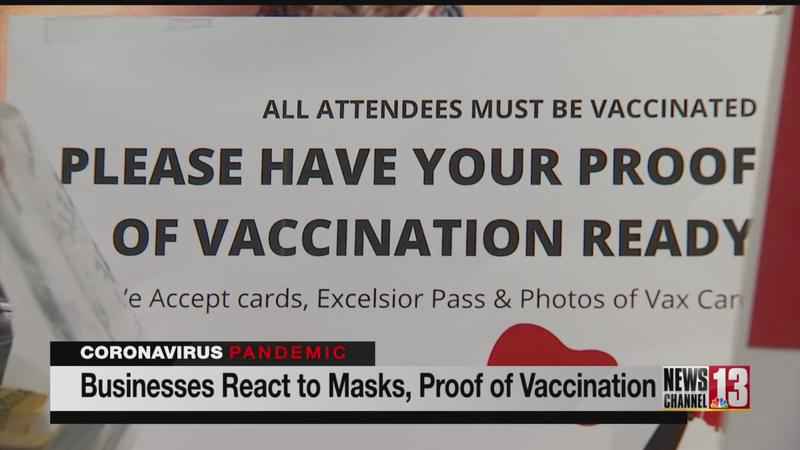 "It would be tragic," she replied, "I don’t think anybody is going to follow that mandate. I’m not."

Boals said she would never ask any of her customers to provided proof of vaccination, calling it an illegal invasion of privacy. And she’s not very happy either with the prospect of being told to wear a mask.

"I think that everybody exists in their own sphere of what they think is safe and not safe," Shapiro added.

Business owners are also mindful that Covid-19 is a fluid situation which means the rules and regulations that apply tonight might be thrown out the window tomorrow as the uncertainty continues.