Protesters gathered outside the Target in Clifton Park on Friday, demanding change.

A group of Black children entered the Target in Clifton Park on April 18. According to the Black Liberation Coalition, the children received Easter money from their mother. The coalition says a Target employee claims the children were shoplifting.

"Managers said they were too rowdy and once the police got there, the police were asking questions and said they were suspects in a larceny case. If that was the case, they would have gotten larceny charges that day, so target was racially profiling these kids," said Samira Sangare, from Saratoga BLM.

The Saratoga County Sheriff’s Department say it was reported the youth were being disruptive and that’s why deputies responded. A Saratoga County sheriff’s deputy at one point detains a 14-year-old boy, believed to have autism. The boy was brought to the ground by the deputy. The boy tells deputies he has money. 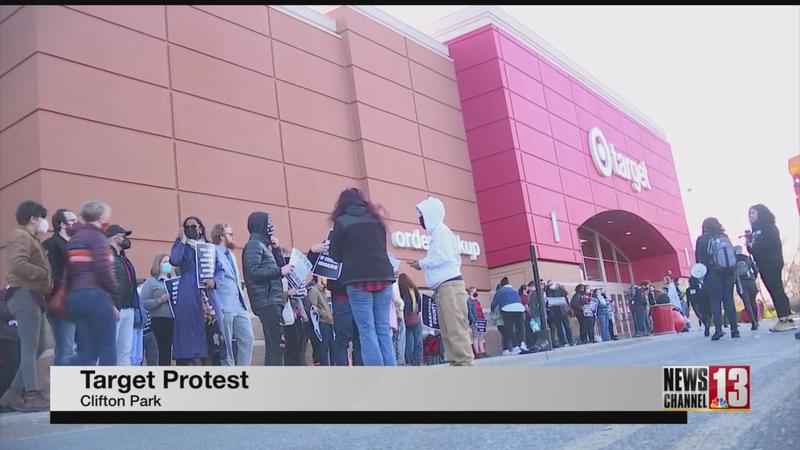 A 17-year-old girl, believed to be the sister of the 14-year-old, tries to push deputies away. The Saratoga County Sheriff’s Department says the girl allegedly struck a deputy in the face with a soap dish, causing physical injury. She was arrested and charged with second-degree assault and resisting arrest.

The protesters say she was protecting her brother and want to see the charges dropped. Sangare believes police could have handle things differently.

"I believe that they could have just asked them to leave. Even if they weren’t stealing, they didn’t have to cause all this trauma and body slam people," said Sangare.

We reached out to the Saratoga County Sheriff’s Department and have not heard back yet. However, they previously issued a statement saying in part: "We take all allegations of assault against law enforcement seriously and they will be dealt with to the fullest extent of the law."

A spokesman from Target says a security team member called police after a guest who entered the store had previously threatened violence against one of their team members. They issued a statement saying in part: "We regret that this escalated into a confrontation, and we’ll continue to provide the sheriff’s department with the help they need for this investigation."