Protesters rally to force shut down of controversial Dunn Landfill

RENSSELAER – Since the S.A. Dunn Landfill first opened back in 2015, there have been many Rensselaer residents who have thought of it as the bane of their urban existance.

"The truck traffic, the noise, the diesel blowing trash into the cemetery and onto the school property are just unacceptable," says David Ellis, Chairman of the grassroots organization Rensselaer Environmental Coalition.

Ellis was one of the organizers of a rally held outside Rensselaer City Hall on Wednesday night to protest the controversial dump. Among the several dozen folks who attended was East Greenbush Supervisor Jack Conway.

"There are residents of East Greenbush who are experiencing negative impacts of this dump," Conway asserts, "There’s no reason for it. It has destroyed the property value to these homes."

Once the demonstrators moved inside the common council chamber, they were determined to convince lawmakers not to renew the landfill operating permit. One of the first speakers at a public forum was Judith Enck, a former Regional Director of the EPA. 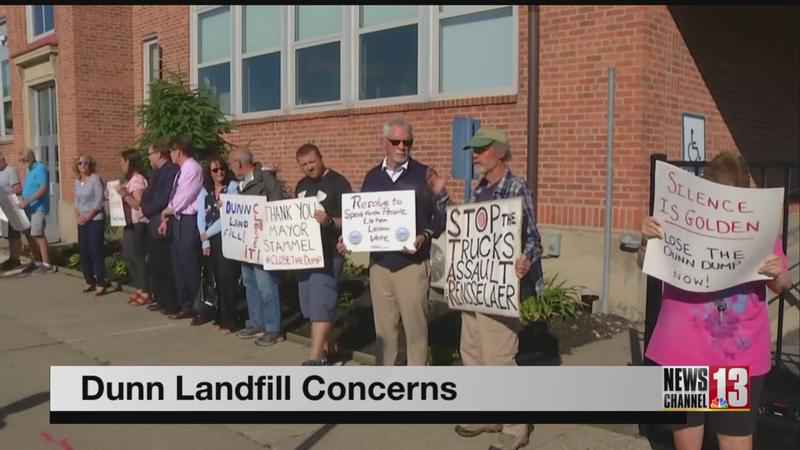 "This is an environmental catastrophe happening in real time on your watch," Enck admonished the council members.

Among the myriad complaints regarding the landfill is that it sits roughly 200 feet from the Rensselaer City School District campus where 1,100 students, faculty, and staff attend classes every day.

"This dump has to close before our children are suffering the side affects of cancer from what they’re inhaling," stated Marilyn Reilly, a city resident.

Our commitment is to make S.A. Dunn a model facility in the industry. We measure that commitment by working collaboratively with regulators, including a full time DEC inspector who is on site every day. We’ve invested heavily in environmental upgrades that immediately showed dramatic improvements, and we continually explore ways to make our facility even better. We closely monitor environmental conditions, making operational decisions in real-time to limit any potential impacts. DEC and independent studies have repeatedly affirmed SA Dunn does not negatively impact the health of our neighbors.

While the resolution may look good on paper, the reality is without S.A. Dunn there would be a considerable budget deficit, the students at Rensselaer High School would not have had any sports this year, and city charities would struggle to meet the needs of vulnerable residents. Our economic impact on Rensselaer is immensely positive, and we’re proud to say we step up when our neighbors need us. We’ll leave the local politics to others, and will continue to focus on being an important part of Rensselaer’s future.

When all was said and done, the Rensselaer Common Council voted 5-0 to adopt the resolution. A similar resolution was also unanimously passed by the East Greenbush Town Board Wednesday night.

The ball is now in DEC’s court. They will decide whether to renew Dunn’s operations permit when the current permit expires in 2022,