TROY – Even though many people might think Christmas Eve should be lush with the sentiment: Peace on Earth, Good Will Toward Men, that was definitely not the case outside the Rensselaer County Office Building on Friday.

"Too many of our politicians are really absolutely disgusting," said Bob Blackmon, President of the Justice Center of Rensselaer County.

Many of the several dozen protestors who gathered in Troy on a chilly Friday were members of the Justice Center. All of the folks focused their anger on the County Legislature, which earlier in the week voted a $20,700 pay raise for County Executive Steve McLaughlin, 17% more than he currently makes.

"This is what we’ve noticed, Steve," stated Noreen McKee, Vice President of the Justice Center, "Just having been indicted on criminal charges for stealing from your campaign, maybe this raise is an attempt to pad your pension just in case you have to resign." 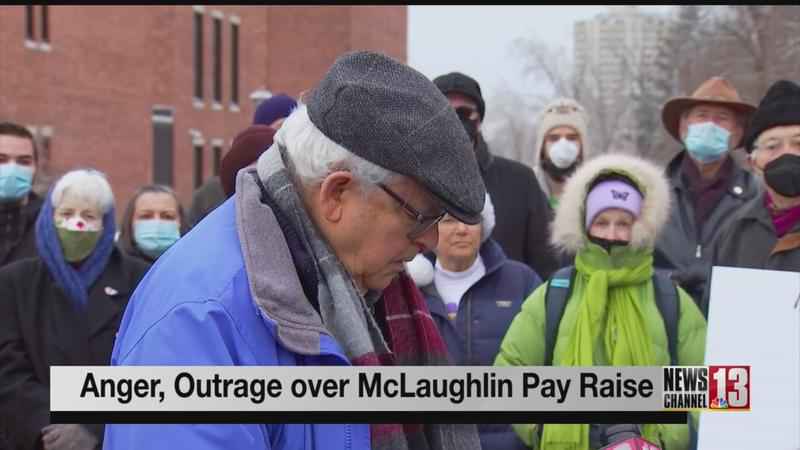 "People are sick of this crap," declared Linda O’Malley, also a Justice Center board member.

Among the angry protestors were two Democratic county lawmakers.

"The increases themselves are outrageous," stated Democratic Legislator and Minority Leader Peter Grimm. "The process alone is wrong."

"It took that $20,700 to draw attention to the fact that corruption has been going on in Rensselaer County for years, at least four years," added Legislator Cindy Doran.

"Rensselaer County just passed a budget for 2022 that reduces property taxes by 10%, the largest tax decrease in county history. There have been four consecutive tax reductions, county property taxes have been reduced by over 18%, and county taxpayers now pay a tax rate that is comparable to 2002. The county has seen historic private sector job growth and improved services, including paving 170 miles of roads in four years, significant reductions in debt, all while dealing with a pandemic. The resolution passed by the County Legislature this week provides raises to some positions that have not been adjusted for years and are lower compared to other counties with similar populations and budgets."

The folks who gathered are determined to make their New Year’s resolution a reversal of the pay raises. They’re currently in the process of coming up with a strategy to do that.