A Capital Region business owner is giving an empty building in Halfmoon a new lease on life.

The building was formerly used in the NXIVM cult.

But in Michael Fortin’s words, he’s bringing his good vibes and welcoming the community back into the building.

“The sense of welcoming that I’ve gotten here is just something that you want to be a part of, the things that are going on in this community are great,” said Fortin.

Fortin currently owns Joe’s Tavern and Max410 in Cohoes. He is moving and upgrading Joe’s by bringing his staff into the new building. He says the new space will be visible to thousands more people every day. 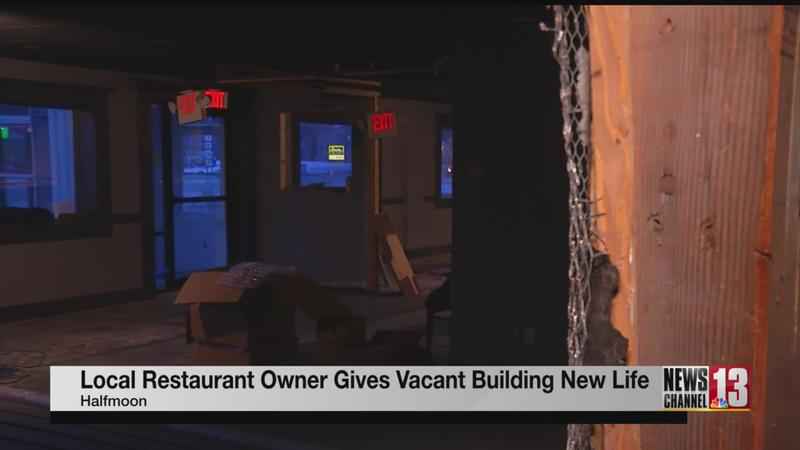 The new restaurant has a new namesake, Fortin’s one-year-old daughter Emma Jayne. It was only fair—after his other restaurant was named for his son Max.

“It kind of just came natural to name it after her, seeing as Max410 is named after my son,” he said.

But the new construction is painting over the building’s past.

Years ago, it was home to the popular Romano’s Restaurant, and Fortin wants to turn it back into that kind of staple, quite literally taking it out of the shadows.

“Before with NXIVM here, a lot of it was secrecy. People didn’t know what was going on. And as you can see, we don’t even have the windows covered. You’re welcome to come and see what we have going on here at Emma Jayne’s, and we’re excited to welcome everybody back in this building,” he said.

Now he’s working on getting it ready to host 150 people. The restaurant will also have space for private or semi-private events and a large outdoor deck for the warmer months.

Fortin is planning to serve the same spaghetti and meatballs and contemporary American food that his customers at Joe’s currently enjoy, plus steak and seafood.

Joe’s is planned to close in mid-February, and Emma Jayne’s is set to open on March 3.