There are new developments in the ongoing issues at Gaffney’s in Saratoga Springs. The police chief for the Spa City is speaking for the first time since the bar and restaurant had its liquor license suspended.

The suspension came after police say a man was stabbed early Sunday morning inside the bar and an officer was injured in a related fight outside. This all comes after the city already ordered the business to shut down on Monday for unpaid permits.

Chief Shane Crooks says it got to a point where the police had to bring the issues to the State Liquor Authority, because not only were customers getting injured, but also police officers.

The chief says the department is grateful that the State Liquor Authority took action at this special meeting on Tuesday.

Police had referred the bar to the state agency after Sunday’s stabbing and several previous times in the past seven or so months. 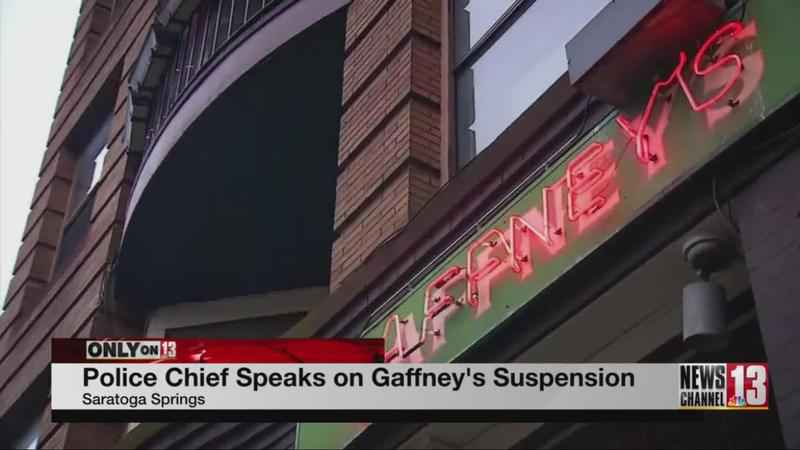 The chief says they turn over video, audio and an explanation of the violations they believe are happening at the business.

Gaffney’s faces 13 other violations on its liquor license from other referrals.

Five were scheduled for a hearing Thursday, but NewsChannel 13 has learned the meeting may be cancelled.

"As a police department, we don’t want to see any business shut down if we don’t have to, but we can’t have a business operating where violence is occurring continuously, and affecting the safety of the public, and the officers," Crooks said.

Crooks says this has been really stressful for his officers. He says when he watches the body camera footage back from some of the violent nights at Gaffney’s, he sees the mayhem that these officers are thrown into and how quickly they have to think on their feet to keep people safe.

Crooks says they aren’t the only bar near Caroline Street that has caused issues, but that Gaffney’s was out of control.

Police had stepped up late-night staffing in the area, and the chief has had several officers injured in the chaos there.

Gaffney’s released a statement Wednesday afternoon saying they will comply with the suspension.

"We will work with the State Liquor Authority and the City of Saratoga Springs to rectify this unfortunate situation with the hope of reopening as soon as it is practicable to do so," the bar said in a statement.