Suspect arrested in standoff at Stewart’s in Troy

The suspect in an hour-long standoff at the Stewart’s on Vandenburgh Avenue in Troy is in custody.

Troy police officers responded to a report of a hostage situation around 11 p.m. Thursday at the Stewart’s Shop on Vandenburgh Avenue.

Police say it all started when the suspect used his vehicle to ram the front door of the store prior to entering the building.

When officers arrived, they saw two male employees and one male suspect inside the store. The suspect was standing behind the counter while holding what appeared to be a knife to the throat of one employee.

Officers called the Crisis Negotiation Team to the scene and established communication with the suspect through the broken front door. 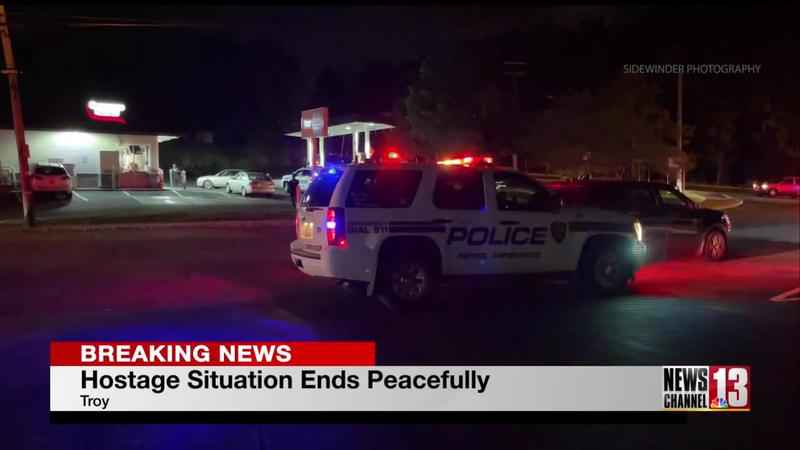 Within a few minutes, the suspect released one of the employees, but continued to stand behind the second employee while holding the weapon to the employee’s throat.

After nearly an hour of negotiations, the suspect released the second employee, put down his weapon, and surrendered to officers without incident.

UPDATE: Repair crews fixing the damage to a #Stewarts Shop on Vandenburgh Ave in #Troy after a hostage situation last night pic.twitter.com/UhhXXBftrM

Capt. Raymond White told NewsChannel 13 on scene it was later determined that the weapon was a pair of scissors.

The suspect was removed from the scene and transported to a local hospital for evaluation.

Police say the location and hostages appear to have been chosen at random, and the suspect’s actions appear to be the result of a mental health crisis.

The incident is still being investigated, and criminal charges are pending.

The store was closed while a maintenance crew replaced the front door. It has since reopened.

BREAKING NEWS – the Stewart’s Shop on Vandenburgh Avenue in Troy has reopened after repairs. Last night, a man drove through the storefront window and proceeded to hold two employees hostage at knifepoint. TPD hostage negotiators TALKED THE MAN DOWN. No injuries. pic.twitter.com/PWAFZF1tWR

"We commend the work of Troy Police officers who responded to last night’s incident at the Stewart’s Shop location on Vandenburgh Avenue, specifically the Crisis Negotiation Team who employed de-escalation tactics to safely resolve the situation. These officers are trained as crisis negotiators and are EDPRT (emotionally distressed persons response team) certified to deal with individuals in mental health crisis, a valuable training all TPD officers are required to undergo. Their expert handling of the situation was critical to a peaceful outcome for the suspect and Stewart’s employees, as well as connecting this individual to relevant mental health services. We applaud all the officers and first responders on scene Thursday night for their work to keep our communities safe."