Danny Burgos was performing in Pittsburgh when he got the news, his touring performance of Broadway’s musical hit, The Band’s Visit, was shutting down due to a pandemic sweeping the globe.

Burgos’ dream was to be in shows just like the one he was in and now those dreams seemed put on hold at best, and crushed at worst.

He left New York and moved home to Miami to figure out what was next.

As the world shutdown and hospitals started to fill up with COVID-19 Patients, Burgos remembers a photo he saw of a nurse taking off her N95 mask.

"I saw a photo of a nurse taking off there N95 and just the imprint on their face. And that struck me, I was like, this is someone who at who is now actually putting their physical body in front of something for someone. And I just found that so honorable," said Burgos. 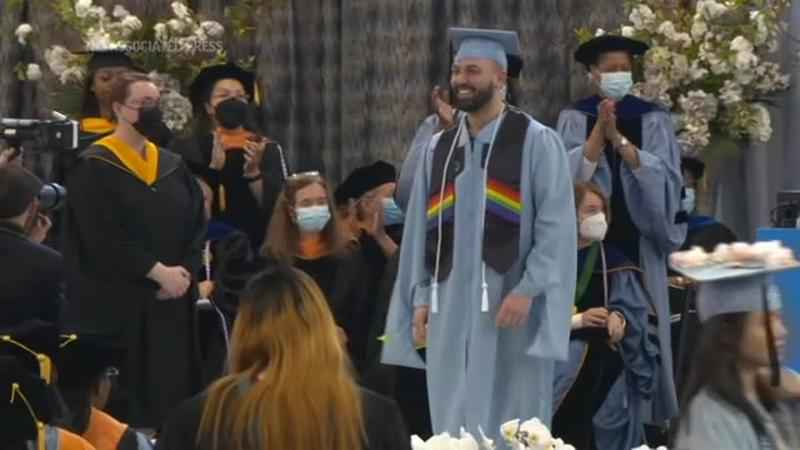 He finished up some academic pre-requisites at a local junior college and then started applying to nursing schools all over the county.

He eventually settled on Columbia University School of Nursing. He would get to return to New York, but his time not for theater.

Unbeknownst to Burgos, he wasn’t the only one inspired by those nurses on the front line.

In the middle of the pandemic, Columbia had its biggest application class ever.

"We weren’t sure if there was going to be when a vaccine was going to come. We were seeing death rates, our current students at the time were seeing death rates they’ve never seen before. And we had the largest application pool ever in the history of the school," said Columbia Associate Dean, Judy Wolfe. "I think what these students symbolize or represent for us is hope of people of this new generation who want to help others."

Tristen Minwoo Kim was another actor inspired to become a nurse.

Kim, born in South Korea, was in Los Angles trying to make his acting dream come true when the world shutdown.

He was also inspired by the courage of the frontline workers he was seeing and reading stories about.

Both Burgos and Kim both say their acting dreams are not over, but put on hold while they take on a new dream and challenge in health care.

It is not lost on Burgos that Columbia University sits right off Broadway, just about 120 streets above the Broadway theaters.