CLIFTON PARK – A theater production in Clifton Park is giving new meaning to the phrase ‘the show must go on’ after vandals struck the set just hours before the cast took the stage.

The "Not So Common Players" have been hard at work on their production of the Stephen Sondheim classic, "A Funny Thing Happened on the Way to the Forum." The show opened June 3 at the Common Stage and is in its second week.

For Set Designer Steve Skinner and his team, imagining, building, painting and securing all of the nooks and crannies of this set is their art.

"So there was a lot of lumber on that stage, and there were a lot of hours, probably about 200, 250 hours put into building that set," Skinner said Thursday. 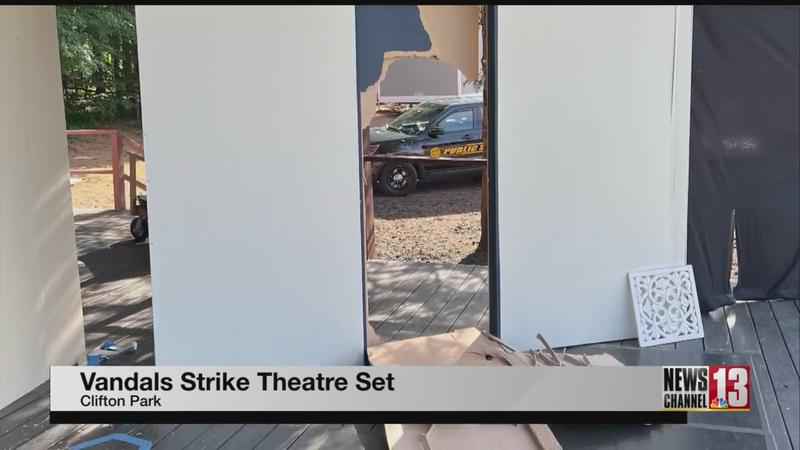 A dark cloud came over the comedy set Wednesday. What was artfully crafted by Skinner and his team was thoughtlessly destroyed by vandals in minutes. Skinner wasn’t sure what to expect when he got the call.

"I figured, eh, just a little bit. I got here and there were doors broken in half, torn off the hinges, kind of just laying aside," he said.

However, the good in humanity quickly upstaged the bad. As the afternoon went on, the theater community and town showed up to rebuild the set.

"[Wednesday], we had 39 people here from five different theater productions, Schenectady Light Opera helped us out, Scotia-Glenville helped us out, there was a flag football team here at the park that brought over leftover food to make sure we could be fed," he said.

Rebuilding has become familiar to the theater community after the curtain stayed closed on live theater for two years.

"This show is just not one that is going to stop," Skinner said.

As of Thursday afternoon, State Police continue to investigate who is responsible for the damage. A spokesperson said no arrests had been made.

The show’s second week of performances begin Thursday night at 8 p.m. and continue Friday, Saturday and Sunday at 8 p.m. at the Common Stage in Clifton Park.

The production is financed by the Town of Clifton Park.

MORE: Not So Common Players