With all the violence we’ve been reporting on in Troy, it’s important for young kids to know they have a safe space to go, be uplifted and encouraged.

At first glance, Cornerstone Barbershop may look like any other spot you go to get a haircut, but the owner Sincere Nunez says he’s bringing new meaning to the phrase ‘hangin’ on the corner.’ "The corner was built off of negativity, where people sold drugs, where people hang out sag their pants, played loud music so we’re trying to bring a different image to that word," he said.

With each cut Sincere Nunez says they’re teaching the youth a new way of thinking, instilling pride with a fresh lineup and just letting them know success is at their fingertips. "It’s what you make, what you build, he said. We teach our young black men a lot. We talk to them a try to tell them that life is not just about drugs, money, and guns.”

Nunez partnered with Pastor Daniel Wilkins and his organization Reigning Legacy to giveaway free haircuts to kids under 14, provide them with clothes, basic necessities like soap and deodorant and a plate full of food. “You just never know what these kids go through because I was that kid that had nothing, that had no family, no one to look up to," said Wilkins.

Determined to make a difference Wilkins says this isn’t a one day event, together with his team they travel all over he Capital Region to help those in need. "I do this for my heart because I know that this is going to plant a seed, and it’s going to really put these kids on the right track, and I feel like that’s what Troy, Albany and Schenectady really needs," said Wilkins. 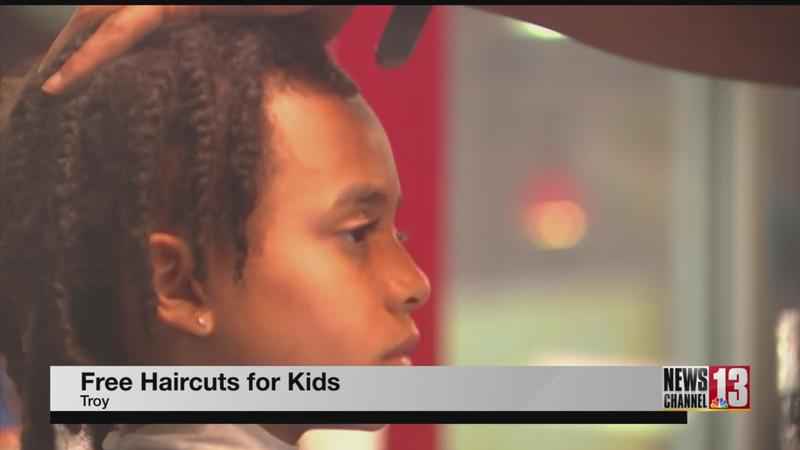 And the kids were really appreciative, one smiled from ear to ear over his brand new shoes.

The whole team pitched in from the barbers, the cooks, the ones keeping everything organized. Nunez said it’s all about unity.“I think the barbershop the foundation to the community” 16:03:51;12-16:03:56;14 It takes a village to raise a child and we need to bring that concept back to our lives," he said.