About 50 people gathered on the steps of City Hall in Schenectady, just trying to make sense of all the shootings that recently took place.

This was the first vigil Victoria Charlotten ever hosted, and it comes just weeks after she became the first generation college graduate in her family.

What was supposed to be the happiest day of her life, as she walked across the stage to receive her diploma from UAlbany, quickly turned tragic as news broke about the Buffalo massacre. “I saw that it happened just shortly, right after my graduation, she said. So it was a good day for me, but it did kill my mood a little bit because it is so close to home.”

Victoria says she had to take action, but while she planned to hold a vigil for the victims in Buffalo, the Texas shooting happened shortly after. “That really broke my heart too, she said. Especially because I have three siblings who are actually about to start school for the first time ever in the fall.”

Filled with passion, for another first, Victoria roused the audience with her poetry in the form of spoken word, as she talked about putting an end to gun violence. “I just really wanted to bring attention and evoke that emotion on how bad it hurt me even though I don’t know any of these victims, it still hurts me a lot,” she said. 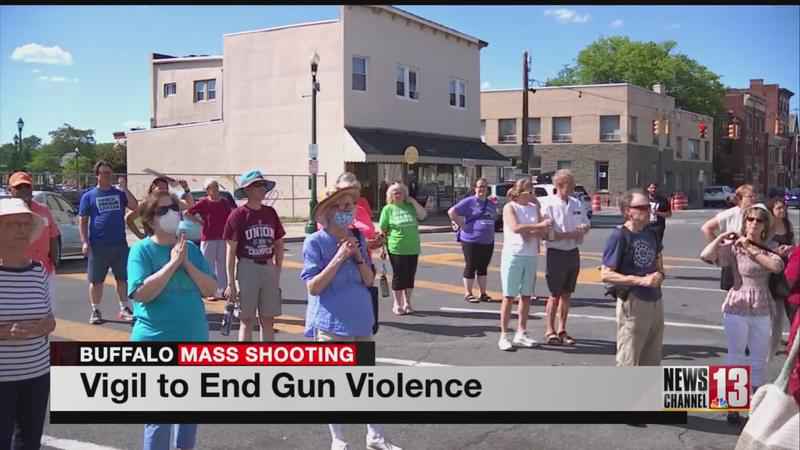 A diverse crowd stood in attendance as various speakers recapped the horrific murders that happened this month. One at a grocery store, another at a church, and then a school, all places people should feel safe. “What can we do next to make sure stuff like this doesn’t happen,” Victoria asked.

A moment of silence was held so prayer could take place. The prayer was, that love be felt so that the family members who lost their loved ones could feel comfort and that politicians could change laws.

Victoria says she’s optimistic that change can take place, saying all those who were in attendance at the vigil is evidence that positive things can happen, when everyone works together.