Last week was a good reminder to never shrug off a Saturday slate of college football games that appears to be short on marquee matchups.

Intrigue arises in odd places even without the obvious “big games.”

This week’s schedule pops even less than that. If not for No. 24 Texas A&M and No. 25 Oregon squeezing into the bottom of the AP Top 25 there would be no matchups of ranked teams this week.

Still, there is still plenty of alluring games to look forward to.

The five most intriguing: 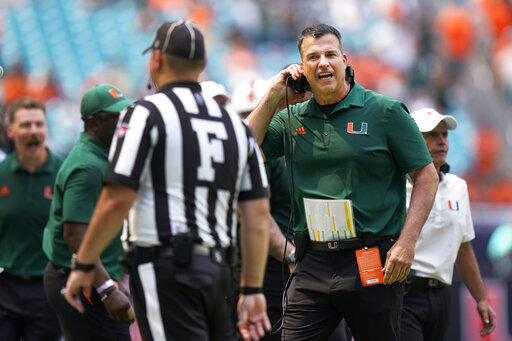 Auburn quarterback T.J. Finley (1) reacts after scoring a touchdown against San Jose State during the second half of an NCAA college football game Saturday, Sept. 10, 2022, in Auburn, Ala. (AP Photo/Butch Dill)

BYU quarterback Jaren Hall (3), passes the ball to running back Mason Fakahua (22) during the first half of the team's NCAA college football game against Baylor, Saturday, Sept. 10, 2022, in Provo, Utah. (AP Photo/George Frey)

1) No. 13 Miami at No. 24 Texas A&M. What this game lost in luster — ESPN’s “College GameDay” diverted travel plans — it gained in intrigue. How do the Aggies bounce back from the Appalachian State loss? Can the Hurricanes secure an early breakthrough victory under Mario Cristobal? ?

This rare SEC-Big Ten regular-season game is the return match of last season’s meeting in Happy Valley. There has been so much made about Bryan Harsin’s tenuous job status at Auburn. This game will either ignite the hot seat or provide a respite for the second-year coach.

Second straight game against a ranked opponent for the Cougars. Win this one and there is a path for BYU to make some noise nationally in October with back-to-back games against Notre Dame and No. 10 Arkansas. As for the Ducks, let’s see if the Georgia game was an anomaly.

The Wolfpack faced a scare at East Carolina in Week 1 and now get a Power Five test. The Red Raiders are coming off an overtime victory against Houston and are definitely capable of dousing N.C. State’s high expectations.

5) Fresno State at No. 7 Southern California

The Trojans are what was expected so far. QB Caleb Williams and WR Jordan Addison can score in bunches. The defense has lots of holes. Fresno State beat UCLA last year and nearly beat Oregon State last week. Can Bulldogs quarterback Jake Haener keep up with USC’s stars?

The rest of the ranked teams facing FBS opponents, with odds from FanDuel Sportsbook:

Gamecocks certainly did not look ready to upset the Bulldogs while getting run over by Arkansas last week … GEORGIA 38-13.

First of two games for the Tide to get some things sorted out … ALABAMA 55-3.

Been more than 100 years since Ohio State lost to another Ohio school. Shout out to Oberlin College of 1921 … OHIO STATE 45-17.

The nonconference schedule has been a three-week-long tune-up for the Wolverines … MICHIGAN 56-7.

The Sooners’ first visit to Lincoln since 2009 and their old rivals couldn’t be in much worse shape … OKLAHOMA 38-21.

From the Big Ten (Michigan State) to the SEC (Tennessee) for the Zips … TENNESSEE 52-3.

Good opportunity for the Bears to get some of the kinks out of that passing game … BAYLOR 42-10.

USF was hoping to be in better shape when it signed up for this 2-for-1 series four years ago … FLORIDA 42-14.

Rebels and Yellow Jackets have not played a regular-season game since 1946 when they were both in the SEC … OLE MISS 38-17, BEST BET.

Purdue (minus 1) at Syracuse (@thebenwhitehead): Orange RB is Sean Tucker is the only player in the country with at least 200 yards rushing and 100 yards receiving … PURDUE 28-21.

Follow Ralph D. Russo at https://twitter.com/ralphDrussoAP and listen at http://www.appodcasts.com