Fields, Bears struggle in red zone in loss to Commanders

By JAY COHEN The Associated Press 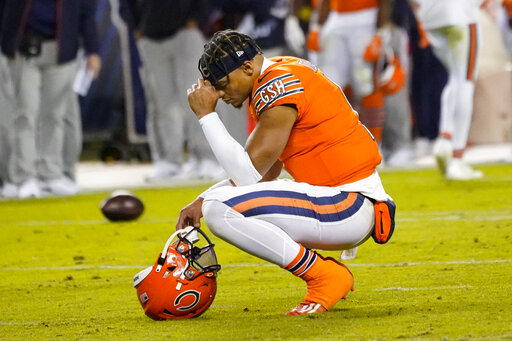 Chicago Bears quarterback Justin Fields after falling to score in the closing minute of the second half of an NFL football game against the Washington Commanders in Chicago, Thursday, Oct. 13, 2022. The Commanders defeated the Bears 12-7. (AP Photo/Charles Rex Arbogast)[ASSOCIATED PRESS/Charles Rex Arbogast]

CHICAGO (AP) — It was Justin Fields. It was the offensive line. It was the receiving corps.

The Chicago Bears struggled on offense again, and there was plenty of blame to go around.

Fresh off an encouraging second half at Minnesota, Fields and the Bears were shut down by Jonathan Allen and the Washington Commanders on national television. Chicago came up empty on three drives inside the Washington 10 during an ugly 12-7 loss Thursday night.

“Plenty of opportunities in the game that we just didn’t finish,” Fields said. “So we’ve just got to get better with that.”

Led by Fields and Khalil Herbert, the Bears rushed for 238 yards and outgained the Commanders 392-214 overall. But Fields was sacked five times and faced heavy pressure for much of Chicago’s third consecutive loss. 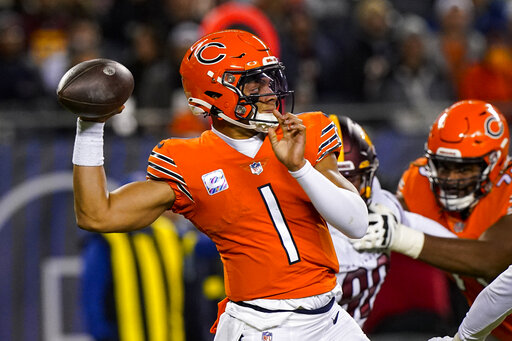 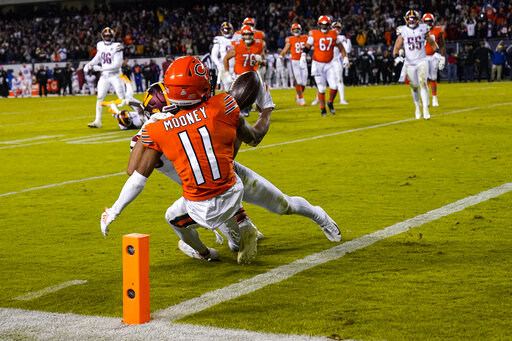 Just like Sunday’s 29-22 loss to the Vikings, when the Bears’ final drive was stopped by an Ihmir Smith-Marsette fumble, two more turnovers proved costly.

First, Fields was intercepted by Allen at the Washington 5 in the first quarter. Then Velus Jones muffed a punt early in the fourth, setting up Brian Robinson’s go-ahead touchdown run.

“It wasn’t a smart play. I should have let it go. I tried to do too much,” Jones said.

The Bears also drove to the Commanders 3 in the second quarter, but Fields missed a wide-open Ryan Griffin on a potential touchdown pass and Herbert was stuffed on fourth-and-goal.

Chicago had one more chance in the closing minutes, and Fields drove the team to the Washington 5. Following two incomplete passes, Darnell Mooney made a juggling fourth-down catch at the 1, but couldn’t get in the end zone.

The Bears got their only score when Fields found Dante Pettis on a pretty 40-yard touchdown pass with 7:16 left in the third.

On Fields’ fifth interception of the season, the second-year quarterback threw the ball right off the helmet of Washington defensive tackle Efe Obada. It bounced high into the air and Allen hauled it in for his first career interception.

Chicago became the first team in 23 years to fail to score on at least three goal-to-go drives in a single game. Cincinnati had four such drives in a 22-0 loss to Baltimore on Dec. 26, 1999.

“There was multiple plays in that game we could have made to change the whole game but for some reason or other we didn’t finish,” Fields said. “It doesn’t matter if you drive all the way down to the 5- or 1-yard line and don’t score. That’s the same thing as a three-and-out when you punt. Inside the 10, it’s the same thing. So I guess the biggest thing is just finishing.”

Jay Cohen can be reached at https://twitter.com/jcohenap