Mets come up empty for deGrom and lose to Cubs again, 4-1

By MIKE FITZPATRICK The Associated Press

NEW YORK (AP) — Jacob deGrom and the first-place Mets were supposed to beat up on all these bad opponents this month.

Instead, the bottom feeders have been nothing but trouble.

New York’s ace was outpitched by journeyman Adrian Sampson, and the frustrated Mets mustered little offense again Tuesday night in a 4-1 loss to the Chicago Cubs.

“Finishing off a good season is really challenging,” Mets manager Buck Showalter said. “Because you see the finish line. You’re trying to get there and kind of sometimes get away from the things that got you there.”

Ian Happ homered deep into the second deck on a 99 mph fastball from deGrom (5-2), and No. 9 batter David Bote added his second home run of the season for the Cubs (60-82), who won the series opener 5-2 on Monday.

New York Mets' Pete Alonso (20) reacts after an umpire foul ball ruling against the Chicago Cubs during the first inning of a baseball game on Tuesday, Sept. 13, 2022, in New York. (AP Photo/Jessie Alcheh) 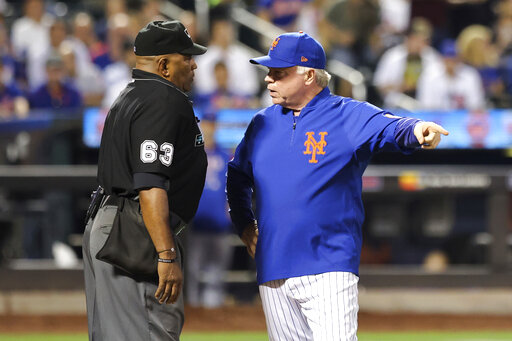 New York Mets' Francisco Lindor reacts after striking out against the Chicago Cubs during the third inning of a baseball game on Tuesday, Sept. 13, 2022, in New York. (AP Photo/Jessie Alcheh)

One night later, the scuffling Mets squandered another potential chance to increase their slim NL East lead over Atlanta, which played later in San Francisco. New York is 5-6 in a 16-game stretch against Washington, Pittsburgh, Miami and Chicago — all more than 20 games under .500 this season.

“Tonight’s on me. I needed to go out there and put up zeros and just wasn’t able to do it,” said deGrom, who struck out 10 in six innings. The two-time Cy Young Award winner gave up three runs and four hits without a walk.

Pete Alonso barely missed a two-run homer in the first when it hooked just foul, and the slugger slammed down his bat after drawing a walk.

That ticked off Sampson, and the two exchanged heated words before umpires spoke directly to each of them.

“I was just like, `Just don’t do that.’ It doesn’t look good. It’s not part of our game,” Sampson said. “It was a non-issue. I have a lot of respect for the guy. … There’s no hard feelings.”

Said Alonso: “I wasn’t upset that he didn’t throw the ball in the zone, I was upset that the wind blew it foul. … It’s just two guys that are in the heat of the moment, just competing. He’s obviously a highly competitive individual and so am I. There’s no bad blood or anything like that.”

Alonso launched his 34th homer in the ninth against Brandon Hughes, who got five outs to finish it. New York managed only four hits against three Cubs pitchers and was booed a bit by the Citi Field crowd of 26,435.

The Mets have dropped four consecutive home games for the first time since last September.

“We’re a really good team and I feel like we have all the pieces to overcome this adversity,” Alonso said.

Sampson (2-5) allowed two hits and four walks in six shutout innings. He struck out three and rose to the occasion against deGrom.

“I think it helps me because the outside factor is everyone expects him to win, so it’s not any pressure on me,” Sampson said. “I think he has more pressure on him to perform rather than me.”

The 30-year-old righty is pitching for his third major league team in five seasons, plus a shaky 2020 year in the Korean Baseball Organization. He had never thrown six scoreless innings in the majors before, though he’s fared well on the mound this month.

Bote went deep against reliever Seth Lugo in the seventh to make it 4-0.

It was the first time deGrom gave up more than two earned runs at Citi Field since Aug. 29, 2019, against the Cubs. He went 24 straight home starts in between, a major league record. He has permitted three earned runs or fewer in 39 consecutive starts, matching Jim Scott (1913-14) for the longest streak in big league history.

Cubs: CF Rafael Ortega exited in the fourth after getting hit on the fingers by a pitch he bunted foul. … SS Nico Hoerner (triceps) was feeling better and planned to go through a little light baseball activity before the game to determine if he could be available off the bench. … RHP Keegan Thompson, on the 15-day injured list since Aug. 20 with lower back tightness, is expected to make a minor league rehab start Friday. … LHP Steven Brault (shoulder strain) threw a bullpen. … LHP Justin Steele (low back strain) threw a bullpen Monday that went as expected. He is eligible to come off the injured list Saturday.

Mets: RHP Max Scherzer (left oblique irritation) is scheduled to make a rehab start Wednesday with Triple-A Syracuse. If all goes well, he’s expected to come off the injured list early next week in Milwaukee. … RHP Tylor Megill (right shoulder strain) and RHP Drew Smith (right lat strain) both pitched at Syracuse. After a lengthy delay at the start, Megill gave up five runs, three hits and two walks in two-thirds of an inning. He threw only 15 of 29 pitches for strikes during his fourth rehab outing. Smith struck out two in a scoreless inning of work. Megill, normally a starter, is expected to fill a bullpen role when he returns, which could be soon. … All-Star RF Starling Marte has been sidelined since last week with a partial fracture of his right middle finger. “It’s going to be slow,” Showalter said. “It’s going to heal, and it’s going to heal before the season’s over. Depending on what season you’re talking about.”