By ELAINE KURTENBACH The Associated Press

NUSA DUA, Indonesia (AP) — Discord over Russia’s war on Ukraine and festering tensions between the U.S. and China are proving to be ominous backdrops for world leaders gathering in Indonesia’s tropical Bali island for a summit of the Group of 20 biggest economies starting Tuesday.

With recession looming as central banks fight decades-high inflation partly brought on by the war, U.S. Treasury Secretary Janet Yellen said that ending the conflict would be the “single best thing that we can do for the global economy.”

British Prime Minister Rishi Sunak, writing in the newspaper The Telegraph, called Russia a “rogue state” and slammed its president, Vladimir Putin, for staying away.

“Leaders take responsibility. They show up. Yet, at the G-20 summit in Indonesia this week, one seat will remain vacant,” wrote Sunak, who took office last month. “The man who is responsible for so much bloodshed in Ukraine and economic strife around the world will not be there to face his peers. He won’t even attempt to explain his actions.”

Australian Prime Minister Anthony Albanese is seen behind a projector as he speaks during the B20 Summit ahead of the G20 leaders summit in Nusa Dua, Bali, Indonesia, Monday, Nov. 14, 2022. (AP Photo/Aaron Favila) 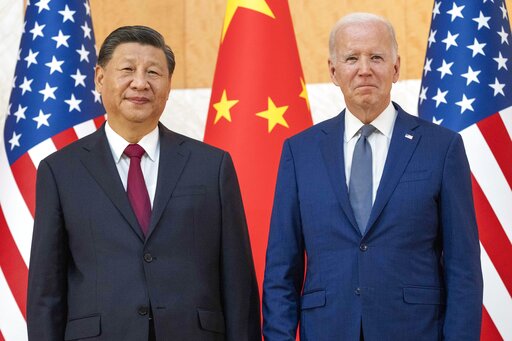 President Joe Biden walks to speak during a news conference on the sidelines of the G20 summit meeting, Monday, Nov. 14, 2022, in Bali, Indonesia. (AP Photo/Alex Brandon)

The G-20 meetings provide another opportunity for leaders to show unity in their support for Ukraine, discussions that “are inseparable from those on how we can strengthen our collective security,” Sunak said.

In myriad ways, the war’s repercussions have encompassed the globe as disruptions to grain shipments and energy supplies have pushed costs of living sharply higher.

“Russia’s brutal war in Ukraine is creating food and energy crises. It’s disrupting supply chains and raising the cost of living. Families are worried that they’re not going to be able to put food on the table or won’t be able to heat their homes during winter,” Canadian Prime Minister Justin Trudeau told a business conference on the sidelines of the G-20 meetings.

Most vital for countries threatened with famine is whether Russia will agree to extend the U.N. Black Sea Grain Initiative, which is up for renewal on Saturday.

The deal, reached in July, enabled major global grain producer Ukraine to resume exports from ports that had been largely blocked for months because of the war. Russia briefly pulled out of the deal but rejoined it days later.

U.N. Secretary General Antonio Guterres said Monday that he was “hopeful” the initiative will be renewed after progress was made on resolving issues related to payments for Russian exports of food and fertilizers.

The effort helped stabilize markets and bring down food prices, he said.

“I’m hopeful that our efforts will go on being successful and we will be able to remove the last obstacles.”

Cooperation between the two largest economies is vital for global efforts to curb the carbon emissions that cause climate change, among other issues, he said.

The meeting between Biden and Xi on the eve of the start of the formal G-20 summit meetings was a step toward finding common ground despite antagonisms over trade, technology and other issues as relations have grown increasingly strained.

Signaling that the two sides will resume communication on climate change, Biden underscored that the United States and China must work together to address such transnational challenges, the White House said in a statement on the roughly three-hour meeting,

The two leaders agreed that “a nuclear war should never be fought” and can’t be won, “and underscored their opposition to the use or threat of use of nuclear weapons in Ukraine,” the White House said in a reference to Russian officials’ thinly veiled threats to use atomic weapons as Moscow’s nearly nine-month invasion of Ukraine has faltered.

It was unclear if any headway was made on longstanding differences over trade.

But in a statement, the Chinese government said the two leaders agreed to keep up consultations and discussions on economic and trade policies.

Even having top leaders of the two sides meet after a long hiatus during the pandemic is progress of a kind that might facilitate more productive talks in the larger G-20 meeting, which includes 19 of the largest economies and the European Union. Another 10 countries were invited as guests.

The G-20 was founded in 1999 as a forum for cooperation on economic and financial matters. In 2009, top G-20 leaders began holding annual meetings to craft a response to the global financial crisis.

“The G-20 was made for moments like these and built for these challenges,” Australian Prime Minister Anthony Albanese told the “B-20″ business conference, which wrapped up on Monday.

“We can achieve far more together than we ever could alone,” he said.