By COLLIN BINKLEY The Associated Press 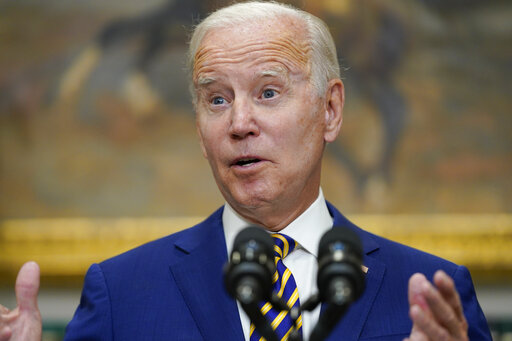 The bill is being pushed as a complement to Biden’s plan, which promises to wipe away student debt for millions of Americans but does little to help future students avoid heavy levels of debt. Democrats say their plan would tackle the root causes behind America’s $1.6 trillion in federal student debt.

“Simply put, by making loans cheaper to take out and easier to pay off, the LOAN Act will help improve the lives of student loan borrowers — both now and in the future,” said Rep. Bobby Scott, D-Va., chair of the House Education and Labor Committee.

But similar to Biden’s loan cancellation plan, the proposed legislation does not address the rising cost of college itself, which has continued to increase for decades.

The election-season bill has dim odds of passage in the House and virtually no hope in the Senate, where Democrats hold a slim 50-50 edge and Republican votes would be needed even to take the bill up. Still, it spells out Democratic priorities as both parties vow to address the nation’s ballooning student debt.

FILE - Rep. Bobby Scott, D-Va., speaks during a House Committee on the Budget hearing on March 29, 2022, in Washington. Building on President Joe Biden’s student debt cancellation plan, House Democrats on Thursday, Sept. 15, proposed new legislation that would increase federal student aid, lower interest rates on loans and take other steps to make college more affordable. “Simply put, by making loans cheaper to take out and easier to pay off, the LOAN Act will help improve the lives of student loan borrowers — both now and in the future,” said Scott. (Rod Lamkey/Pool Photo via AP, File)

Much of the proposal focuses on expanding federal Pell Grants, which are given to low-income students but have failed to keep pace with inflation and tuition rates. When the Pell program was started in the 1970s, the grants covered nearly 80% of tuition, fees and housing at a typical public university, according to federal data. Today, they cover about a quarter of those costs.

The legislation would double the maximum Pell Grant, to $13,000, over a five-year span, and then make sure it stays even with inflation. Families that receive food stamps or Medicaid would automatically get an additional $1,500 per year. And students would be able to use Pell Grants for up to 18 semesters, up from 12 now.

Democrats also aim to permanently relax the rules for the Public Service Loan Forgiveness program, which was created to help public servants get their student debt forgiven but has been marred by complex rules.

The proposal would allow public workers to get their debt cancelled after making 96 monthly payments, down from 120, and it would allow certain periods of non-payment to count, including military service or time in the Peace Corps. The Education Department recently loosened some rules during the pandemic, but the changes are set to expire at the end of October.

Several of the bill’s components are perennial aspirations for Democrats, who have long sought to increase Pell Grants and fix the loan forgiveness program. But those goals have been thwarted by a deeply divided Congress — Biden has repeatedly sought to double Pell Grants but had to settle for a $400 increase this year as part of a bipartisan budget bill.

House Republicans unveiled their own student loan proposal in August, looking to scale back lending — especially for costly graduate school programs — and rein in debt forgiveness.

The Republican legislation would eliminate the Public Service Loan Forgiveness program entirely, and allow students to borrow no more than $100,000 in federal student debt for graduate school, down from an existing $138,500 cap. Additionally, it would allow students to use Pell Grants for short-term programs that focus on job training.

In a direct shot at the Biden administration, the GOP bill also sought to limit the education secretary’s ability to cancel student debt.

Biden’s cancellation plan, announced last month, promises to forgive $10,000 in federal student debt for individuals with incomes less than $125,000 a year or families below $250,000. Those who received Pell Grants to attend college get another $10,000.

The Education Department says an application will be available by early October. Whether borrowers actually see the relief depends on whether the plan survives legal challenges that are almost certain to come.

Although the broad details of the plan have been available for weeks, many with student debt have been left to wonder about exactly how it will be carried out.

Long before Biden announced his plan, the Education Department said borrowers could get refunds for payments made during the pandemic. But could borrowers undo those payments and then apply to get the debt canceled? Officials didn’t say, sowing confusion about what borrowers should do.

Answers started to emerge this week as the Education Department quietly updated a website with details on the plan.

According to the agency, borrowers who made payments during the pandemic will automatically get that money refunded if they apply for Biden’s cancellation — but only if their previous payments left them with a loan balance lower than the $10,000 or $20,000 they’re getting canceled.

Borrowers who paid off their loans during the pause will need to request a refund first, then request cancellation, the department said.

Many Democrats applauded Biden’s plan, but some have said it does little to stop future students from piling on student debt. Even Biden’s education secretary, Miguel Cardona, acknowledged the limited scope of a one-time debt cancellation.

Talking to reporters last week, Cardona said it would be “short-sighted” to think the cancellation will solve the student debt problem.

Instead Cardona drew attention to on a new, more generous loan repayment plan that was unveiled alongside the cancellation. Under that proposal, borrowers’ monthly bills would be capped at 5% of their earnings, down from 10% now, and any remaining balance would be forgiven after 10 years, down from 20 years now.

“It’s not as flashy,” Cardona said of the repayment plan, “but it has generational impact.”

Democratic lawmakers agree that cancellation is only part of the solution. Rep. Frederica Wilson, D-Fla., a sponsor of the new bill, said it’s up to Congress to make sure borrowers don’t sink into debt again, especially students of color who are more likely to borrow debt and struggle to repay it.

“This legislation brings together some of the most forward-thinking and innovative proposals into one comprehensive proposal so that this generation is the last to experience America’s student loan debt crisis,” Wilson said.

Find more on AP’s coverage of student loans at https://apnews.com/hub/student-loans

The Associated Press education team receives support from the Carnegie Corporation of New York. The AP is solely responsible for all content.