“The Flash” star Ezra Miller pleaded not guilty at an arraignment Monday morning in Bennington County. The actor is charged with burglary and petty larceny.

Miller, 29, is accused of breaking into a home in May in Stamford and stealing alcohol. The actor, who identifies as non-binary, told police they were there to borrow cooking ingredients while the owner wasn’t there.

Miller appeared at the hearing via video conference.

The actor, who has a home in Stamford, entered a neighbor’s home on May 1 and took three bottles of alcohol, according to court documents.

The person who filed the complaint explained that Miller had been at his house before, since the two are neighbors and friends. However, the neighbor says that on this occasion Miller walked inside his house without permission. The neighbor was not home and saw what took place on a surveillance video. 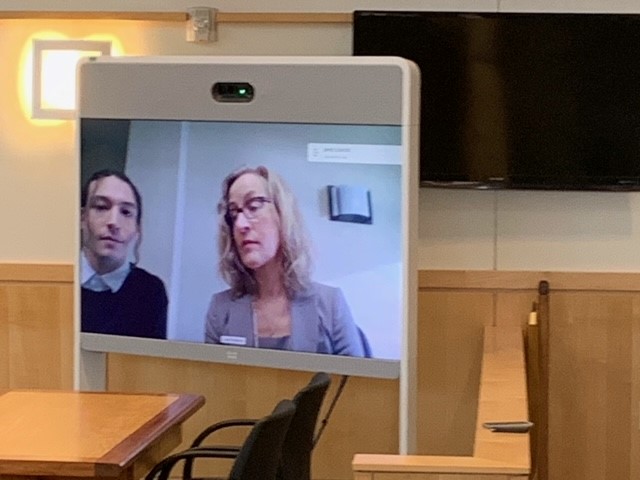 Ezra Miller appears via video conference for a court hearing in Bennington County.

The judge informed Miller on Monday that they are not allowed to contact or go to the neighbor’s house.

The actor co-starred in the movie “Justice League” as DC Comics superhero the Flash. Miller has already filmed a “Flash” movie that’s due out in theaters next year.

The burglary case is the latest legal issue for Miller. Police arrested the actor twice earlier this year in Hawaii, including for disorderly conduct and harassment at a karaoke bar. The second incident was for second-degree assault.

In addition, the parents of 18-year-old Tokata Iron Eyes, a Native American activist, earlier this year filed a protection order against Miller. They accuse the actor of grooming their child and other inappropriate behavior with her as a minor from the age of 12. However, Tokata Iron Eyes disputes that.