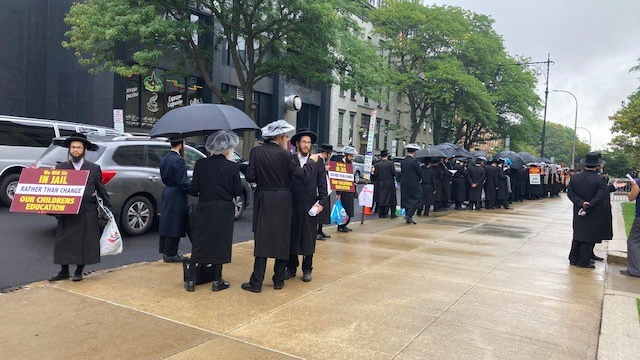 Members of the Orthodox Jewish Community outside the Department of Education in Albany on Monday. (WNYT)

The New York State Board of Regents is proposing new rules that would require private schools to provide an education that is equivalent to public schools. The board is meeting Monday, before the full board votes Tuesday.

The law, requiring non public schools to provide an education that is “substatially equivalent” has been on the books since the 1800s, but the new rule would change how the state evaluates education.

The changes would apply to all nonpublic schools but affect Hasidic yeshivas, or Orthodox Jewish schools, the most.

Members of the Orthodox Jewish community have voiced opposition to the proposal, saying they feel an education in the Torah is the most important education for their community. Many gathered to protest outside the State Department of Education building in Albany Monday.

“What should be judged here is the output, the efficacy of the educational system. Not it’s content per se,” said Yaakov Shapiro, a parent advocate.

Rabbi Yeruchim Silber agrees. He believes the government should not be intervening with the Jewish education system.

“We have a wonderful school system. We educate thousands of kids. Crime is almost non-existent. It’s a beautiful community,” said Silber.

Shulim Leifer, protesting in Albany Monday, says he went to a Yeshiva and he did not receive a basic education.

“Because of that struggle, I needed to teach myself what I know,” said Leifer. “I’m here in support of a basic education and I’m hoping that with these regulations there will start to be accountability.”

As for Catholic schools, the NYS Catholic Conference issued a statement that says in part, “Every child in New York State deserves a quality education, and our Catholic schools have always been more than happy to demonstrate that we are substantially equivalent to — and often exceed — public schools in the education we provide.”

“New York State law requires that every child receive an education that allows them to fulfill their potential and teaches them the skills and knowledge needed to contribute to society and participate fully in civic life. Over the past two years, the State Education Department has consulted extensively with stakeholders representing the variety of the non-public school community, which has deeply and substantively informed the development of these draft regulations. In recognition of the diversity of non-public schools across the state, the proposed regulations set forth multiple pathways for schools to demonstrate substantial equivalency of instruction and provide time for schools to make necessary adjustments where needed. As always, people have the right to express themselves and their views on public policy,” said Emily DeSantis, a spokesperson for the department.