By CHRISTOPHER WEBER and STEFANIE DAZIO The Associated Press 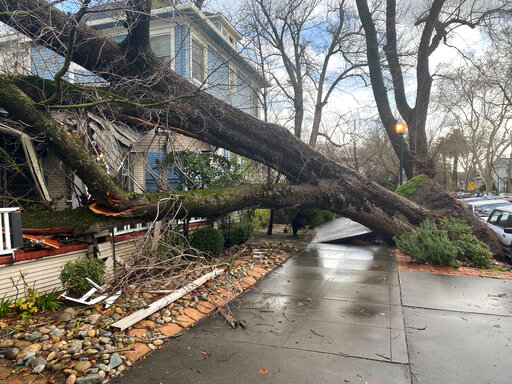 A tree collapsed and ripped up the sidewalk damaging a home in Sacramento, Calif., Sunday, Jan. 8, 2023. The weather service's Sacramento office said the region should brace for an even more powerful storm system to move in late Sunday and early Monday. “Widespread power outages, downed trees and difficult driving conditions will be possible," the office said on Twitter. (AP Photo/Kathleen Ronayne)[ASSOCIATED PRESS/Kathleen Ronayne]

LOS ANGELES (AP) — As another powerful storm walloped California, a 5-year-old boy was swept away by floodwaters Monday on the state’s central coast and an entire seaside community that is home to Prince Harry, Oprah Winfrey and other celebrities was ordered to evacuate on the fifth anniversary of deadly mudslides there.

Tens of thousands of people remained without power, and some schools closed for the day. Streets and highways transformed into gushing rivers, trees toppled, mud slid and motorists growled as they hit roadblocks caused by fallen debris. The death toll from the relentless string of storms climbed from 12 to 14 on Monday, after two people were killed by falling trees, state officials said.

A roughly seven-hour search for the missing boy turned up only his shoe before officials called it off as water levels were too dangerous for divers, officials said. The boy has not been declared dead, said spokesperson Tony Cipolla of the San Luis Obispo County Sheriff’s Office.

The boy’s mother was driving a truck when it became stranded in floodwaters just before 8 a.m. near Paso Robles, a small city inland from California’s central coast, according to Tom Swanson, assistant chief of the Cal Fire/San Luis Obispo County Fire Department.

Bystanders were able to pull the mother out of the truck, but the boy was swept out of the vehicle and downstream, likely into a river, Swanson said. There was no evacuation order in the area at the time. 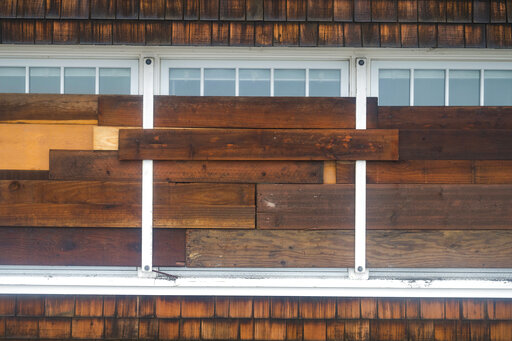 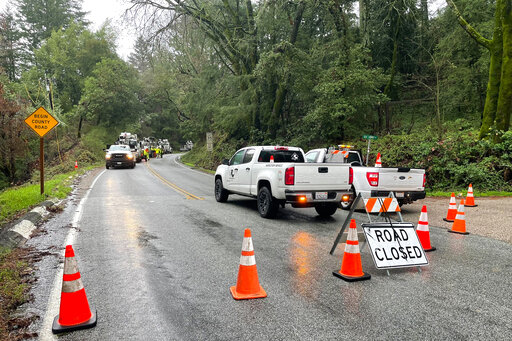 The closed Summit Road is blocked as emergency personnel are deployed in the area in Santa Clara County, Calif., Monday, Jan. 9, 2023. Californians grappled with flooding and mudslides Monday as the latest in a series of powerful storms walloped the state, shuttering schools, toppling trees and leaving tens of thousands without power. (AP Photo/Haven Daley) 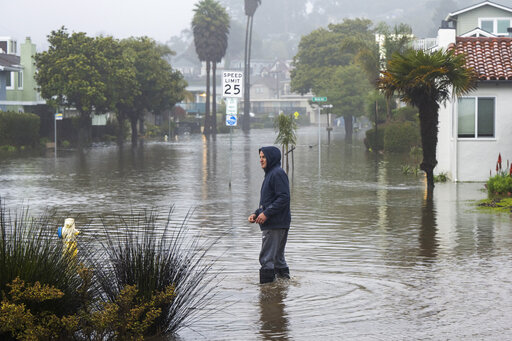 About 130 miles (209 kilometers) to the south, the entire community of Montecito and surrounding canyons scarred by recent wildfires were under an evacuation order that came on the fifth anniversary of a mudslide that killed 23 people and destroyed more than 100 homes in the coastal enclave.

In Los Angeles, a sinkhole swallowed two cars in the Chatsworth area on Monday night. Two people escaped by themselves and firefighters using ropes and an aerial ladder rescued two others who had minor injuries, authorities said.

The National Weather Service reported rainfall rates of one inch (2.5 centimeters) per hour, with heavy downpours expected throughout the night in the upscale area where roads wind along wooded hillsides studded with large houses. Montecito is squeezed between mountains and the Pacific and is home to celebrities including Rob Lowe and Harry and Meghan, the Duke and Duchess of Sussex.

Ellen DeGeneres shared an Instagram video of herself standing in front of a raging creek near the Montecito home where she lives with her wife, actor Portia de Rossi. She said in the post that they were told to shelter in place because they are on high ground.

“This is crazy!” the talk show host, wearing a hoodie and raincoat, says in the video. “This creek next to our house never flows, ever. It’s probably about nine feet up and is going to go another two feet up.”

Jamie McLeod’s property was under the Montecito evacuation order, but she said there is no way for her to “get off the mountain” with a rushing creek on one side and a mudslide on the other. The 60-year-old owner of the Santa Barbara Bird Sanctuary said one of her employees came to make a weekly food delivery and is stuck, too.

McLeod said she feels fortunate because her home sits on high ground and the power is still on. But she said she tires of the frequent evacuation orders since the massive wildfire followed by the deadly landslide five years ago.

“It is not easy to relocate,” said McLeod. “I totally love it — except in catastrophe.”

Santa Barbara County Sheriff Bill Brown said the decision to evacuate nearly 10,000 people was “based on the continuing high rate of rainfall with no indication that that is going to change before nightfall.” Creeks were overflowing, and many roads were flooded.

Northbound lanes of U.S. 101, a key coastal route, were expected to be shut until Tuesday. Many other highways and local roads were closed because of rockslides and flooding.

Up the coast, evacuation orders were issued in Santa Cruz County for about 32,000 residents living near rain-swollen rivers and creeks. The San Lorenzo River was declared at flood stage, and drone footage showed numerous homes sitting in muddy brown water, the top halves of autos peeking out.

Maria Cucchiara, who lives in tiny, flooded Felton, went for a walk to count her blessings after “a huge branch harpooned” the roof of her small studio, she said.

“I have two kitties, and we could’ve been killed. It was over a ton,” she said. “So needless to say, it was very disturbing.”

Nicole Martin, owner of the Fern River Resort in Felton, described a more laid-back scene Monday. Her clients sipped coffee amid towering redwood trees and were “enjoying the show,” she said, as picnic tables and other debris floated down the swollen San Lorenzo.

The river is usually about 60 feet (18 meters) below the cabins, Martin said, but it crept up to 12 feet (4 meters) from the cabins.

In Northern California, several districts closed schools and more than 35,000 customers remained without power in Sacramento — down from more than 350,000 a day earlier after gusts of 60 mph (97 kph) knocked majestic trees into power lines, according to the Sacramento Municipal Utility District. A homeless person killed by a falling tree in the region was among the new deaths announced Monday.

The National Weather Service warned of a “relentless parade of atmospheric rivers” — long plumes of moisture stretching out into the Pacific that can drop staggering amounts of rain and snow. The precipitation expected over the next couple of days comes after storms last week knocked out power, flooded streets, and battered the coastline.

The weather service issued a flood watch for a large portion of Northern and Central California, with 6 to 12 inches (15 to 30 centimeters) of rain expected through Wednesday in the already saturated Sacramento-area foothills.

In the Los Angeles area, there was potential for as much as 8 inches (20 centimeters) of rain in foothill areas late Monday and Tuesday. High surf was also expected.

Much of California remains in severe to extreme drought, though the storms have helped fill depleted reservoirs.