‘I don’t dance’: Daniel Craig nonetheless has moves in ad

By SIAN WATSON The Associated Press

While promoting his latest movie, “Glass Onion: A Knives Out Mystery,” Daniel Craig said dancing doesn’t come naturally to him — but he couldn’t resist a pitch from “Thor: Love and Thunder” director Taika Waititi.

The pair collaborated on a recent Belvedere vodka ad, which was the James Bond actor swinging his hips and shimmying down hotel corridors while showing off tattooed biceps and a devastating pout.

“It was hard work because I don’t dance. So, the fact is, we had an amazing choreographer to JaQuel Knight who came in and I worked with him for a couple of days,” Craig told The Associated Press. “I just went for it. You don’t get chances like that very often.”

His latest acting project, “Glass Onion,” follows a party of sycophants and friends of billionaire Miles (Ed Norton) who find themselves trapped on an island with a murderer on the loose. 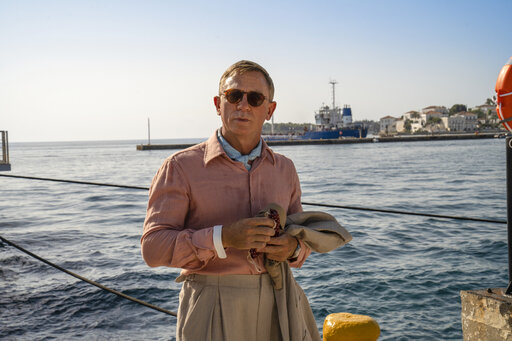 This image released by Netflix shows Daniel Craig in a scene from "Glass Onion: A Knives Out Mystery." (John Wilson/Netflix via AP)

As with the first “Knives Out” movie, director Rian Johnson has assembled an all-star cast including Janelle Monáe, Kate Hudson, Leslie Odom Jr., and Dave Bautista.

Craig’s detective Benoit Blanc is the only returning character — with the British actor saying he works as hard as he can to get back into the headspace of the Southern sleuth. Especially given Blanc’s trademark accent.

And does this include slipping into character and adopting Blanc’s Southern drawl round the dinner table with his family which includes wife Rachel Weisz? Not a chance.

“My family’s not that nice, I’m not allowed to do that,” he laughs.

The film, which also stars Kathryn Hahn, Jessica Henwick and Madelyn Cline, will receive a limited theatrical release this week before screening internationally on Netflix on Dec. 23.