Increase in Venezuelan migration is felt across US

By ACACIA CORONADO and GISELA SALOMON The Associated Press 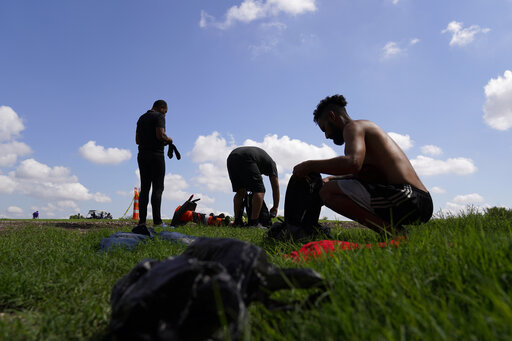 FILE - Migrants gather their personal items as they wait to be processed by the Border Patrol after illegally crossing the Rio Grande River from Mexico into the United States at Eagle Pass, Texas, Friday, Aug. 26, 2022. Venezuelans have surpassed Guatemalans and Hondurans to become the second-largest nationality stopped at the U.S. border in August 2022 after Mexicans. (AP Photo/Eric Gay, File)[ASSOCIATED PRESS/Eric Gay]

EAGLE PASS, Texas (AP) — It cost Nerio two months and everything he had to get from Venezuela to the U.S., traveling mainly by foot and watching as exhausted fellow migrants were assaulted or left behind to die.

Like an increasing number of Venezuelans, Nerio undertook a dangerous journey that included traveling through Panama’s notorious jungle, the Darien Gap, and Mexico, where migrants often face extortion and threats from government officials, in hopes of a better life in the U.S.

“We know that nobody wants us to make it here,” Nerio said last month in Eagle Pass, Texas, a city of 30,000 people that is at the center of the increase in Venezuelan migrants to the U.S. He asked that his last name not be published due to fears for his safety.

Last month, Venezuelans surpassed Guatemalans and Hondurans to become the second-largest nationality stopped at the U.S. border after Mexicans. Nerio, who traveled with about a dozen others fleeing poverty and violence in Venezuela, was among them.

Venezuelans were stopped 25,349 times, up 43% from 17,652 in July and four times the 6,301 encounters in August 2021, authorities said Monday, signaling a remarkably sudden demographic shift. 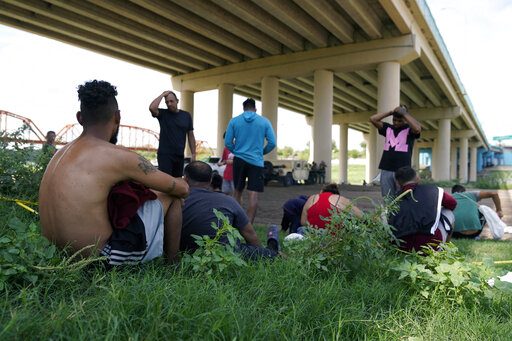 FILE - Migrants wait to be processed by the Border Patrol after illegally crossing the Rio Grande River from Mexico into the United States at Eagle Pass, Texas, Friday, Aug. 26, 2022. Venezuelans have surpassed Guatemalans and Hondurans to become the second-largest nationality stopped at the U.S. border in August 2022 after Mexicans. (AP Photo/Eric Gay, File)

An estimated 6.8 million Venezuelans have fled their country since the economy tanked in 2014, mostly to Latin America and Caribbean countries. But the U.S. economy’s relative strength since the COVID-19 pandemic has caused Venezuelan migrants to look north. Also, U.S. policies and strained relations with the Venezuelan government make it extremely difficult to send them home.

Word has spread in Venezuela as more family and neighbors reach Texas and are released with notices to appear in immigration court or on humanitarian parole.

“We hope that in a few years, the problems in Venezuela will be fixed so we can return to our home country, but until then we have to be migrants and endure what this journey will mean for us,” Nerio said.

The impact is reflected in daily headlines. About 50 migrants that Florida Gov. Ron DeSantis flew to the upscale Massachusetts island of Martha’s Vineyard last week were Venezuelan, as were five of six men whom U.S. authorities found drowned in the Rio Grande near Eagle Pass in early September.

José, who asked to be identified only by his middle name due to fears for his safety, was on one of two DeSantis flights. He walked nearly three months before crossing the Rio Grande in an inflatable raft and surrendering to the Border Patrol.

While staying at a San Antonio migrant shelter, José met a woman promising at least three months of housing, a job, medical care, and free legal help. She told migrants they would be going to Washington, Chicago and other immigrant-friendly “sanctuary” cities.

“We imagined that she was a very important person, that she had lots of influence and could really help us,” said José, who needed to get to Philadelphia for a required check-in with immigration authorities at the end of September. “We believed in her. The ignorance of the immigrant.”

Yet when they reached Martha’s Vineyard, an enclave known as a summer vacation spot for former President Barack Obama, “Nobody was waiting for us, nobody knew who we were,” José, 27, said in a phone interview from a military base in Cape Cod, where Massachusetts Republican Gov. Charlie Baker moved them on Friday.

A Venezuelan family in Boston offered a room and food to José, who earned $20 a month as a garbage collector in Caracas and left his two children behind with his grandparents. He will let U.S. Immigration and Customs Enforcement know his new address and move his appointment with the agency to Boston.

“Now we are free, we can go anywhere we want,” said José. “I feel blessed by God.”

Venezuela has one of the world’s highest inflation rates and about three-quarters of the population lives on less than $1.90 a day, an international standard for extreme poverty. The monthly minimum wage, paid in bolivars despite a dollar-driven economy, is the equivalent of $15. Many lack access to clean, running water and electricity.

The pandemic made jobs across Latin America and Caribbean countries more scarce, and the U.S. more attractive as a place to live. At the same time, the United States’ strained relationship with Venezuela’s government makes it extremely challenging to expel Venezuelan migrants under a pandemic rule known as Title 42, which U.S. officials invoke to deny people a chance at seeking asylum on grounds of preventing the spread of COVID-19.

Mexico, under pressure from the Biden administration, introduced restrictions on air travel to limit Venezuelan migration to the United States, but many then shifted to the dangerous land journey.

Cuba and Nicaragua have also sent more migrants to the U.S. in the last year. Overall, migrants were stopped 203,597 times on the border in August, or 2.15 million times since October, topping 2 million for the first time in a government fiscal year.

Asked about immigration Tuesday, Biden said: “What’s on my watch now is Venezuela, Cuba and Nicaragua. The ability to send them back to those states is not rational.”

Venezuelan President Nicolas Maduro responded by saying the U.S. was “trying to politically use the suffering of a group of the Venezuelan population that, faced with sanctions and the economic war, made a personal decision to emigrate to other places.”

“North American imperialism tried to destroy our country and collapse it and Joe Biden appears today attacking Venezuela, Cuba and Nicaragua,” Maduro said during an event televised on state media.