By SARA BURNETT and JOEY CAPPELLETTI The Associated Press

LANSING, Mich. (AP) — A question on Michigan’s November ballot asking voters to put the right to an abortion in the state constitution could have a powerful effect: drawing more left-leaning voters to the polls and boosting Democrats’ power in the battleground state.

A record number of people — over 750,000 — signed petitions to put the measure on the Nov. 8 ballot after the U.S. Supreme Court overturned the landmark decision guaranteeing the right to an abortion. Supporters said the decision to do away with Roe v. Wade was a powerful motivation, particularly for women, to get involved in politics — some for the first time.

Now, with a Michigan election board agreeing Friday to place the measure on the ballot, Democrats are hoping that translates into increased support for their candidates in an election in which the party is defending all statewide offices, including governor. Democrats also are looking to take control of at least one chamber of the Republican-led Legislature in a battleground state that is expected to be pivotal in the 2024 presidential election.

“When we collected signatures for the ballot initiative, we met women who had never voted or signed a ballot initiative petition before but were getting involved because the stakes for women and families are so high,” said Kelly Dillaha, Michigan program director for Red, Wine and Blue, a group that helped put the initiative on the ballot. Those same women, Dillaha said, are now mobilizing their friends, families and communities to vote in November.

A poll taken shortly after the Supreme Court decision found 53% of U.S. adults saying they disapprove of the court overturning Roe v. Wade, while 30% said they approve. The Associated Press-NORC Center for Public Affairs Research poll found that 60% think Congress should pass a law guaranteeing access to legal abortion nationwide. 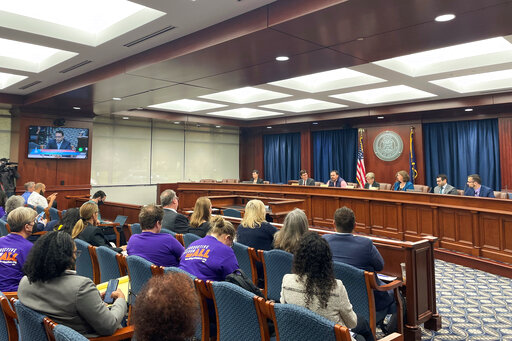 Reproductive Freedom for All leaders and supporters await the Michigan Board of Canvassers vote to send their initiative to the November ballot during a Friday, Sept. 9, 2022, meeting in Lansing, Mich. (Joey Cappelletti/Report for America via AP)

Democrats have seen reason for optimism in other elections held since the Supreme Court’s ruling. In conservative Kansas, for example, voters overwhelmingly defeated an abortion measure that would have allowed the Republican-controlled Legislature to tighten restrictions or ban the procedure outright.

“I think we saw in Kansas that the ballot measure certainly increased turnout and changed the turnout equation significantly to make it more favorable to folks who favor abortion rights,” said Jessica Post, president of the Democratic Legislative Campaign Committee. “And so these Republican candidates have finally kind of gotten what they wanted and what they’ve been working for forever, and they’re ready to face a giant electoral backlash.”

Opponents of abortion say the Michigan initiative goes too far and may affect other laws, such as requiring parental consent for a minor’s abortion, though proponents dispute that. The amendment would affirm the right to make pregnancy-related decisions without interference, including abortion and other reproductive services such as birth control. It would essentially nullify a dormant 1931 state law that makes it a crime to perform most abortions, a ban that was suspended by a judge last spring. A judge declared the ban unconstitutional this week, but abortion opponents could appeal that decision.

Abortion foes also contend the calculation in Michigan is different than it was in Kansas. In Kansas, abortion opponents needed a “yes” vote — which is harder to get than a “no” when asking to amend the constitution, said Fred Wszolek, a GOP consultant working to oppose the measure. In Michigan, abortion foes will need a “no” vote.

“I just have to create a little bit of doubt in people’s minds and they’ll generally vote no, whereas you have to sell people pretty hard on a yes vote when you’re trying to amend a constitution,” Wszolek said.

Michigan is among four states, along with California, Kentucky and Vermont, that will have votes in November on abortion access. A fifth, Montana, is voting on a measure that would require abortion providers to give lifesaving treatment to a fetus that is born alive after a botched abortion.

But of those states, Michigan stands alone in national importance when it comes to picking a president. It is the only swing state of the four, and the officials elected during the November midterm would be in office during the 2024 contest.

The Michigan abortion initiative made the ballot after a bit of partisan drama over the quality of the petitions. Although supporters easily cleared the minimum threshold for signatures, Republicans and abortion opponents argued the petitions had improper or no spacing between certain words and were confusing to voters.

A state elections board subsequently deadlocked along party lines on whether the abortion initiative should appear on the ballot, with Republicans voting no and Democrats voting yes. The 2-2 tie meant the measure wasn’t certified for the ballot.

On Thursday, however, the Michigan Supreme Court ordered the Board of State Canvassers to put the initiative on the Nov. 8 ballot, and the board did just that on Friday.

To be sure, Democrats face some headwinds this election cycle. Historically, the party in power in the White House fares poorly in the president’s first midterm election, and the GOP has criticized President Joe Biden, Michigan Gov. Gretchen Whitmer and other Democrats for their handling of crime and the economy.

GOP strategist John Sellek said the Republican Party will find success in November if the election is about issues such as inflation and children doing poorly in school after the pandemic, rather than abortion. He suggested GOP candidates try to separate the abortion ballot initiative from choosing a candidate for office who has sway over far more issues.

“What (Republicans are) counting on is that the issue of abortion has reached its peak,” Sellek said. “They’re going to attack this initiative as a Trojan horse and try to peel off those people who aren’t comfortable with second-term abortions or eliminating parental consent.”

Democrats already are focusing on abortion rights in the race between Whitmer and her Republican rival, Tudor Dixon, who opposes abortion in all circumstances except to protect the life of the mother. The Democratic Governors Association has repeatedly hit Dixon in advertising, calling her position “too radical” for Michigan.

Dixon appears to be trying to swing the debate elsewhere. In a tweet Thursday following the Michigan Supreme Court decision, she said voters “can vote for Gretchen Whitmer’s abortion agenda & still vote against her.” She then turned to other issues, including crime.

“Gretchen, time to stop hiding behind your BS ads,” Dixon said. “I’m here to clean up your mess, turn our schools around, stop your crime wave, fix the roads, & bring back the jobs you cost us.”

Democratic-aligned groups, meanwhile, are buoyant that the measure will be on the ballot and plan to be out out in full force to get out the vote. A group that led the petition effort, Reproductive Freedom for All, said supporters are out organizing statewide. Actions are planned Saturday, including in the Democratic strongholds of Detroit and Ann Arbor.

“We are energized and motivated now more than ever,” RFFA communications director Darci McConnell said.

Joey Cappelletti is a corps member for the Associated Press/Report for America Statehouse News Initiative. Report for America is a nonprofit national service program that places journalists in local newsrooms to report on undercovered issues.