By MICHAEL TARM The Associated Press

CHICAGO (AP) — R. Kelly parlayed his fame as an R&B superstar to sexually abuse minors and record that abuse on video, a prosecutor told jurors Monday at the singer’s federal trial on charges of child pornography and of rigging his 2008 state child pornography trial.

Assistant U.S. Attorney Elizabeth Pozolo several times raised her voice and singled out Kelly, describing him as a secret sexual predator in closing arguments in Kelly’s hometown of Chicago, where he rose from poverty.

“Robert Kelly abused many girls over many years,” she said, referring to the 55-year-old Grammy winner’s full first name. “He committed horrible crimes against children. … All these years later, the hidden side of Robert Kelly has come out.”

Jurors are expected to began deliberating Tuesday after Kelly’s lead attorney, Jennifer Bonjean, makes her closing argument and prosecutors give a short rebuttal.

Bonjean twice called for a mistrial Monday, complaining that closing arguments by attorneys for Kelly co-defendants Derrell McDavid and Milton Brown were grounded in the presumption that “the world now knows Mr. Kelly is a sex predator.” 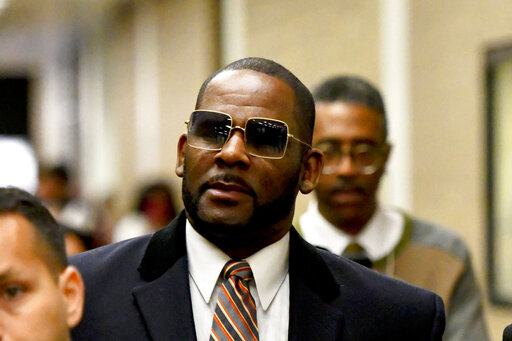 FILE - Musician R. Kelly, center, leaves the Daley Center after a hearing in his child support case on May 8, 2019, in Chicago. Closing arguments are scheduled Monday, Sept. 12, 2022 for R. Kelly and two co-defendants in the R&B singer’s trial on federal charges of trial-fixing, child pornography and enticing minors for sex, with jury deliberations to follow. (AP Photo/Matt Marton, File)

“The presumption of innocence has been abolished for him,” Bonjean said about Kelly, meaning he was unable to get a fair trial. Judge Harry Leinenweber denied the requests.

Known for his smash hit “I Believe I Can Fly” and for sex-infused songs such as “Bump n’ Grind,” Kelly sold millions of albums even after allegations of sexual misconduct began circulating in the 1990s and after his 2008 Illinois trial, at which he was acquitted. Widespread outrage emerged after the #MeToo reckoning and the 2019 docuseries “Surviving R. Kelly.”

Kelly already was sentenced to 30 years in prison after a separate federal trial in New York in June. Convictions on just a few of the 13 counts Kelly faces at his current trial could add years to that.

Pozolo, the prosecutor, focused much of her closing argument Monday on a Kelly accuser who went by “Jane” and who was considered the government’s star witness. She testified that Kelly sexually abused her hundreds of times starting when she was 14.

“He took advantage of Jane’s youth,” Pozolo said about Kelly. “He repeatedly abused her. He performed degrading acts upon her for his own sick pleasure.”

Pozolo reminded jurors of graphic video footage they watched earlier at the trial, recordings that Jane testified depicted Kelly, at around age 30, abusing her when she was 14. Among the videos jurors saw was one at the heart Kelly’s 2008 trial. Jurors at that trial said later they had no choice but to acquit Kelly because Jane didn’t testify then.

“That abuse is forever memorialized,” Pozolo told jurors. “Who does that? Who uses a 14-year-old child to film a video like this? This man. Robert Kelly.”

Before Kelly’s 2008 trial, Pozolo said, Kelly and his associates scrambled to recover multiple sex videos that had gone missing from a collection he often carried around in a large gym bag.

By doing so, she said, Kelly associates sought “to cover up the fact that … R. Kelly, the R&B superstar, is actually a sexual predator.”

Pozolo said the fact that Jane and three other Kelly accusers had so much to lose by testifying should give jurors confidence they told the truth on the stand.

“They opened up old wounds to tell you what happened to them and who did it to them,” she said.

In his closing, an attorney for McDavid said prosecutors had to show that his client actually knew about any abuse of Jane by Kelly in the 2000s — not just that it was likely he knew.

“Did they prove he knew … behind a reasonable doubt?” Beau Brindley asked. “They did not.”

Earlier Monday, Pozolo balked at the idea that McDavid had no inkling in the 2000s that the abuse allegations might be credible after helping to recover missing recordings and handing bags of cash to people who returned videos McDavid knew could destroy Kelly.

“Really? Does that make any sense?” she said. “It doesn’t make sense.”

Also Monday, the judge replaced one juror with an alternate after the panelist reported having a panic attack while listening to closing arguments.

McDavid was the only defendant who testified during the trial that started Aug. 15. Combined, lawyers for the three co-defendants called several witnesses over four days, with McDavid on the stand for three. The witnesses mostly gave testimony favorable to all three defendants. But McDavid may have hurt Kelly’s defense by ultimately questioned Kelly’s believability, saying that listening to Kelly accusers testify at the current had altered his views of the singer.

Follow Michael Tarm on Twitter at https://twitter.com/mtarm and find AP’s full coverage of the R. Kelly trial at https://apnews.com/hub/r-kelly

This story corrects the spelling of the prosecutor’s name. She is Elizabeth Pozolo, not Pozol.