Twitter drama too much? Mastodon, others emerge as options

By BARBARA ORTUTAY The Associated Press

The Mastodon site is shown on a smart phone in Oakland, Calif., on Friday, Nov. 11, 2022. Sites like Mastodon and even Tumblr are emerging as new (or renewed) alternatives to Twitter. (AP Photo/Barbara Ortutay)[ASSOCIATED PRESS/Barbara Ortutay]

Twitter has been a bit of a mess since billionaire Tesla CEO Elon Musk took the helm, cutting the company’s workforce in half, upending the platform’s verification system, sparring with users over jokes and acknowledging that “ dumb things ” might happen as he reshapes one of the world’s most high-profile information ecosystems.

On Thursday, amid an exodus of senior executives responsible for data privacy, cybersecurity and complying with regulations, he warned the company’s remaining employees that Twitter might not survive if it can’t find a way to bring in at least half its revenue from subscriptions.

While it’s not clear if the drama is causing many users to leave — in fact, having a front-row seat to the chaos may prove entertaining to some — lesser-known sites Mastodon and even Tumblr are emerging as new (or renewed) alternatives. Here’s a look at some of them. 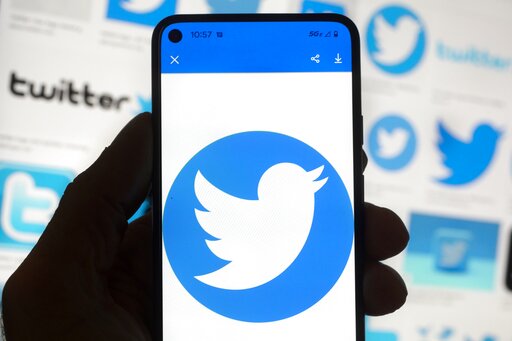 FILE - The Twitter logo is seen on a cell phone, Friday, Oct. 14, 2022, in Boston. The “official” designation for major corporate accounts on Twitter appeared, vanished, and depending on the account, appeared or vanished again and some companies took to the social media platform to warn of imposters. (AP Photo/Michael Dwyer, File) 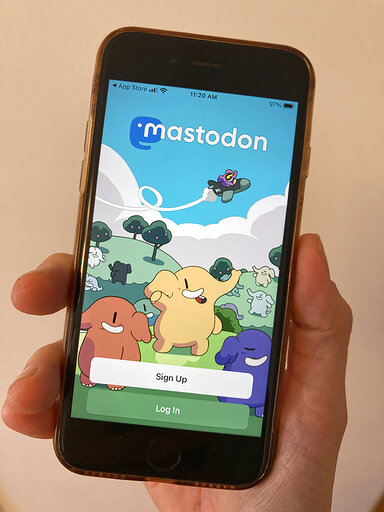 The Mastodon site is shown on a smart phone in Oakland, Calif., on Friday, Nov. 11, 2022. Sites like Mastodon and even Tumblr are emerging as new (or renewed) alternatives to Twitter. (AP Photo/Barbara Ortutay)

Sharing a name with an extinct mammal resembling an elephant, Mastodon has emerged as a frontrunner among those curious about life beyond the blue bird. It shares some similarities with Twitter, but there are some big differences — and not just that its version of tweets are officially called “toots.”

Mastodon is a decentralized social network. That means it’s not owned by a single company or billionaire. Rather, it’s made up of a network of servers, each run independently but able to connect so people on different servers can communicate. There are no ads as Mastodon is funded by donations, grants and other means.

Mastodon’s feed is chronological, unlike Facebook, Instagram, TikTok or Twitter, which all use algorithms to get people to spend as much time on a site as possible.

It can be a tad daunting to try to sign up to Mastodon. Because each server is run separately, you will need to first pick one you want to join, then go through the steps to create an account and agree with the server’s rules. There are general and interest- and location-based ones, but in the end it won’t really matter. Once you’re in, the feed is reminiscent of Twitter. You can write (up to 500 characters), post photos or videos, and follow accounts as well as see a general public feed.

“We present a vision of social media that cannot be bought and owned by any billionaire, and strive to create a more resilient global platform without profit incentives,” Mastodon’s website says.

Currently, the site has more than 1 million users, nearly half of whom signed up after Musk took over Twitter on Oct. 27, according to founder Eugen Rochko.

Another option, Counter Social, also runs an ad-free, chronological social platform that’s funded by users. To prevent foreign influence operations, Counter Social says it blocks access to Russia, China, Iran, North Korea, Pakistan and Syria. It boasts of offering one-click translation into over 80 languages. It has over 63 million monthly users, according to its website.

Remember Clubhouse, back when we were all under lockdown and couldn’t talk in person? It’s the buzzy audio-only app that got somewhat overshadowed by copycat Twitter Spaces, which also lets people talk to each other (think conference call, podcast or “audio chat”) about topics of interest.

Once you join, Clubhouse lets you start or listen into conversations on a host of topics, from tech to pro sports, parenting, Black literature and so on. There are no posts, photos or videos — only people’s profile pictures and their voices. Conversations can be intimate, like a phone call, or might include thousands of people listening to a talk by boldface names, like a conference or stage interview.

For longer reads, newsletters, and general information absorption, these sites are perhaps closest to the blog era of the early 2000s. You can read both without signing up or paying, but some writers, creators and podcasters create premium content for paying subscribers.

Onboarding is simple, and for those who miss the early years of social media, there’s a decidedly retro, comforting feel to the site.

Gabor Cselle, a veteran of Google who worked at Twitter from 2014 to 2016, is determined to create a better Twitter. For now, he’s calling it T2 and says the Web domain name he purchased for it — t2.social — cost $7.16. T2, which may or may not be its final name, is currently accepting signups for its waitlist, but the site is clearly not yet functioning.

“I think Twitter always had a problem in figuring out what to do and how to decide on what to do. And that was always kind of in the back of my mind,” Cselle told The Associated Press. “On Monday, I decided to just go for it. I didn’t see anyone else really doing it.”

Twitter-style text and TikTok-style videos are one idea. Cselle says for this to work, the text really has to be “amped up” so it’s not drowned out by the videos.

“My bet is that it’s going to be easier and more efficient to build a better Twitter or public square now than fix the legacy problems at Twitter,” Cselle added.

Cselle, of course, is not the only one jumping to the opportunity. Project Mushroom, for instance, plans a “safe place on the internet — a community-led open-source home for creators seeking justice on an overheating planet” and says it has received 25,000 early signups to its yet-to-launch platform.

“My sense is that things are going to further fragment into more ideological platforms and some will die and then we’ll see some new consolidation emerge over the next couple of years,” said Jennifer Stromer-Galley, a professor at Syracuse University who studies social media.

One of Twitter’s most valuable features has been the way it allows people to find information within seconds. Was that just an earthquake? Twitter will tell you. Or at least it did.

While there is no perfect replacement for Twitter, staying up to date with local, national and international news is easier than ever. Apple and Google both offer news services that aggregate articles from a broad range of publication (Apple offers a premium subscription service that gets you access to more articles, while Google shows free stories first.) There’s also Flipboard, which works kind of like a personal magazine curated to your interests.

Of course, subscribing to individual publications (or downloading a free news app such as the AP’s AP News) is also an option.

Yes, you might have to pay for some of them and no, you won’t get a blue check mark with your subscription.