Youth mental health is in crisis. Are schools doing enough?

By JOCELYN GECKER and DYLAN LOVAN The Associated Press 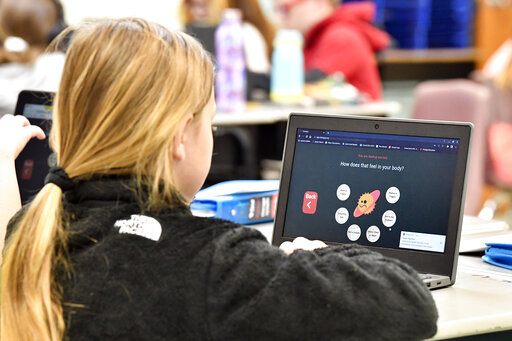 A student at Lakewood Elementary School in Cecilia, Ky., uses her laptop to participate in an emotional check-in at the start of the school day, Thursday, Aug. 11, 2022. The rural Kentucky school is one of thousands across the country using the technology to screen students' state of mind and alert teachers to anyone struggling. (AP Photo/Timothy D. Easley)[ASSOCIATED PRESS/Timothy D. Easley]

CECILIA, Ky. (AP) — For fourth-grader Leah Rainey, the school day now begins with what her teacher calls an “emotional check-in.”

“It’s great to see you. How are you feeling?” chirps a cheery voice on her laptop screen. It asks her to click an emoji matching her state of mind: Happy. Sad. Worried. Angry. Frustrated. Calm. Silly. Tired.

Depending on the answer, Leah, 9, gets advice from a cartoon avatar on managing her mood and a few more questions: Have you eaten breakfast? Are you hurt or sick? Is everything OK at home? Is someone at school being unkind? Today, Leah chooses “silly,” but says she struggled with sadness during online learning.

At Lakewood Elementary School, all 420 students will start their days the same way this year. The rural Kentucky school is one of thousands across the country using the technology to screen students’ state of mind and alert teachers to anyone struggling.

In some ways, this year’s back-to-school season will restore a degree of pre-pandemic normalcy: Most districts have lifted mask mandates, dropped COVID vaccine requirements and ended rules on social distancing and quarantines. 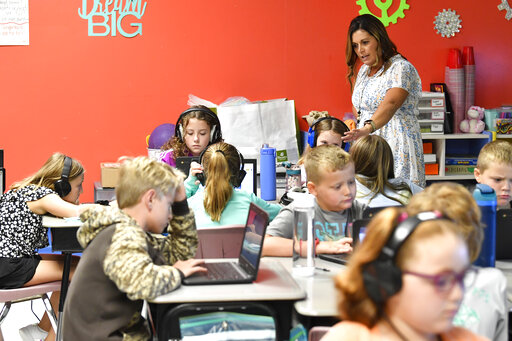 Angela Pike watches her fourth grade students at Lakewood Elementary School in Cecilia, Ky., as they use their laptops to participate in an emotional check-in at the start of the school day, Thursday, Aug. 11, 2022. The rural Kentucky school is one of thousands across the country using the technology to screen students' state of mind and alert teachers to anyone struggling. (AP Photo/Timothy D. Easley) 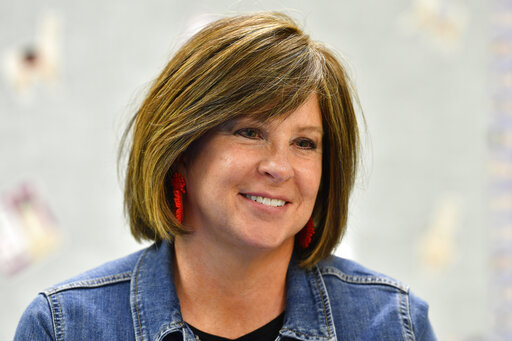 Shelly Kerr, a counselor at at Lakewood Elementary School in Cecilia, Ky., talks about Closegap, a mental health assessment program students start their day using that helps the school identify shy, quiet kids who might need to talk and would have otherwise gone unnoticed, Thursday, Aug. 11, 2022. Students can rifle through a “self-regulation kit” with tips on deep breathing, squishy stress balls and acupuncture rings, says Kerr. (AP Photo/Timothy D. Easley) 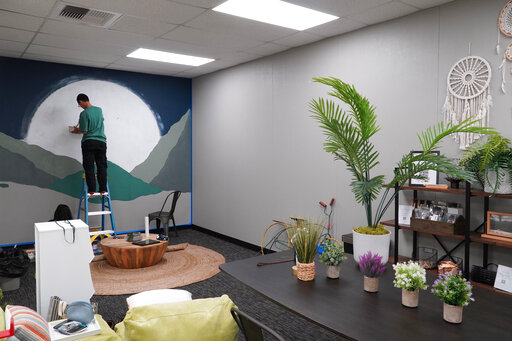 A man paints a mural of a giant moon over mountains during construction of University High School's Well Space in Irvine, Calif., on July 28, 2022. When school starts, the room is to be staffed full-time with a counselor or mental health specialist. (AP Photo/Eugene Garcia) 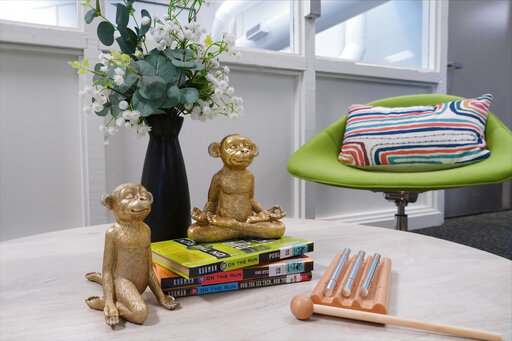 But many of the pandemic’s longer-lasting impacts remain a troubling reality for schools. Among them: the harmful effects of isolation and remote learning on children’s emotional well-being.

Still, some parents don’t believe schools should be involved in mental health at all. So-called social-emotional learning, or SEL, has become the latest political flashpoint, with conservatives saying schools use it to promote progressive ideas about race, gender and sexuality, or that a focus on well-being takes attention from academics.

But at schools like Lakewood, educators say helping students manage emotions and stress will benefit them in the classroom and throughout life.

The school, in a farming community an hour’s drive south of Louisville, has used federal money to create “take-a-break” corners in each classroom. Students can rifle through a “self-regulation kit” with tips on deep breathing, squishy stress balls and acupuncture rings, said school counselor Shelly Kerr. The school plans to build a “Reset Room” this fall, part of an emerging national trend to create campus sanctuaries where students can go to decompress and speak with a counselor.

Closegap founder Rachel Miller launched the online platform in 2019 with a few schools and saw interest explode after the pandemic hit. This year, she said, more than 3,600 U.S schools will be using the technology, which has free and premium versions.

“We are finally beginning to recognize that school is more than just teaching the kids reading, writing and arithmetic,” said Dan Domenech, executive director of the national School Superintendents Association. Just as free lunch programs are based on the idea that a hungry child can’t learn, more and more schools are embracing the idea that a cluttered or troubled mind cannot focus on schoolwork, he said.

The pandemic magnified the fragility of mental health among American youth, who had been experiencing a rise in depression, anxiety and suicidal thoughts for years, experts say. A recent report issued by the Centers for Disease Control and Prevention found 44% of high school students said they experienced “ persistent feelings of sadness or hopelessness ” during the pandemic, with girls and LGBTQ youth reporting the highest levels of poor mental health and suicide attempts.

If a silver lining exists, the pandemic raised awareness of the crisis and helped de-stigmatize talking about mental health, while also bringing attention to schools’ shortcomings in handling it. President Joe Biden’s administration recently announced over $500 million to expand mental health services in the country’s schools, adding to federal and state money that has poured into schools to cope with pandemic-era needs.

Still, many are skeptical schools’ responses are enough.

“All of these opportunities and resources are temporary,” said junior Claire Chi, who attends State College Area High School in central Pennsylvania. Last year, her school added emergency counseling and therapy dogs, among other supports, but most of that help lasted a day or two, Chi said. And that’s “not really a mental health investment for students.” This year, the school says it has added more counselors and plans mental health training for all 10th graders.

Some critics, including many conservative parents, don’t want to see mental health support in schools in the first place. Asra Nomani, a mom from Fairfax County, Virginia, says schools are using the mental health crisis as a “Trojan horse” to introduce liberal ideas about sexual and racial identity. She also worries schools lack the expertise to deal with student mental illness.

“Social-emotional well-being has become an excuse to intervene in the lives of children in the most intimate of ways that are both dangerous and irresponsible,” Nomani said, “because they’re in the hands of people who are not trained professionals.”

Despite the unprecedented funding, schools are having trouble hiring counselors, mirroring the shortages in other American industries.

Goshen Junior High School in northwest Indiana has been struggling to fill a vacancy of a counselor who left last year, when student anxiety and other behavioral problems were “off the charts,” said Jan Desmarais-Morse, one of two counselors left at the school, with caseloads of 500 students each.

The American School Counselor Association recommends a ratio of 250 students per school counselor, which few states come close to meeting.

For the 2020-21 school year only two states — New Hampshire and Vermont — achieved that goal, according to an Associated Press analysis of data from the National Center for Education Statistics. Some states face staggeringly high ratios: Arizona averages one counselor to 716 students; in Michigan, 1 to 638; and in Minnesota, 1 to 592.

Also in Indiana, the School City of Hammond won a grant to hire clinical therapists at all 17 of its schools but has not been able to fill most of the new jobs, said Superintendent Scott Miller. “Schools are stealing from other schools. There just aren’t enough workers to go around.” And despite more funding, school salaries can’t compete with private counseling practices, which are also overwhelmed and trying to hire more staff.

Another challenge for schools: identifying struggling children before they’re in emotional crisis. At the Houston Independent School District, one of the largest in the country with 277 schools and nearly 200,000 students, students are asked each morning to hold up fingers showing how they feel. One finger means a child is hurting deeply; five means she or he feels great.

Houston teachers now give mindfulness lessons, with ocean sounds played via YouTube, and a Chihuahua named Luci and a cockapoo named Omi have joined the district’s crisis team.

But the rooms themselves are not a panacea. For the calming rooms to work, schools must teach students to recognize they feel angry or frustrated. Then they can use the space to decompress before their emotions erupt, said Kevin Dahill-Fuchel, executive director of Counseling in Schools, a nonprofit that helps schools bolster mental health services.

In the last days of summer vacation, a “Well Space” at University High School in Irvine, California, was getting finishing touches from an artist who painted a mural of a giant moon over mountains. Potted succulents, jute rugs, Buddha-like statuettes and a hanging egg chair brought an un-school-like feel. When school starts this week, the room is to be staffed full-time with a counselor or mental health specialist.

The goal is to normalize the idea of asking for help and give students a place to reset. “If they can re-center and refocus,” said Tammy Blakely, the district’s director of student support services, “they can then, after a short break, go back into their classrooms and be prepared for deeper learning.”

This story has been updated to restore first name and title of Tammy Blakely, the Irvine, California, director of support services.

Rodgers, Schultz and Harjai are corps members for the Associated Press/Report for America Statehouse News Initiative. Report for America is a nonprofit national service program that places journalists in local newsrooms to report on undercovered issues.

The Associated Press education team receives support from the Carnegie Corporation of New York. The AP is solely responsible for all content.