9 people in custody after hourslong armed standoff on I-95 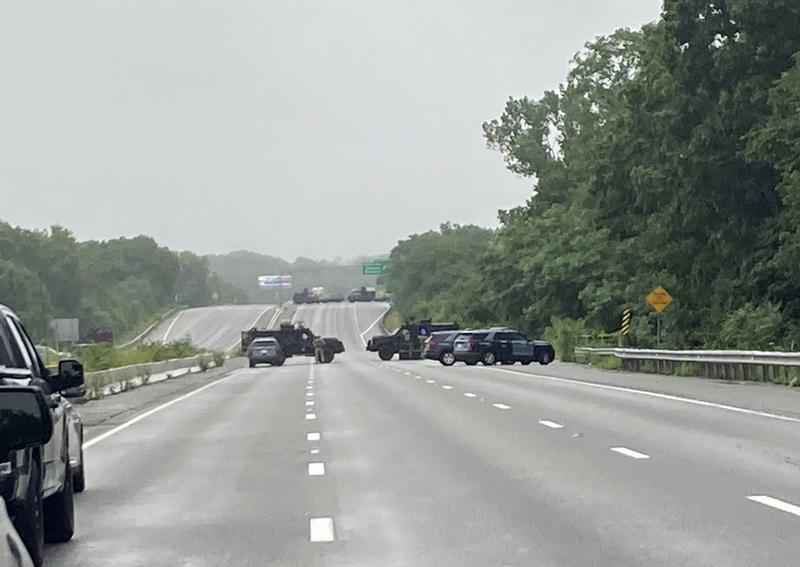 This photo provided by Massachusetts State Police shows police blocking off a section of Interstate 95 near Wakefield, Mass., on Saturday, July 3, 2021. Police say a group of heavily-armed men refuse to comply with law enforcement officers following a traffic stop. Police say the men headed into a wooded area and two suspects were arrested a short time later. Officials were still trying to capture the others in the group ( Massachusetts State Police via AP)

Massachusetts state police said nine suspects have been taken into custody following an hourslong standoff that prompted the partial closure of Interstate 95.

Police said the suspects include two people who were arrested earlier on Saturday.

The standoff shut down a portion of I-95 for much of the morning, causing major traffic problems during the Fourth of July holiday weekend.

In Massachusetts, Interstate 95 runs from the Rhode Island line, around Boston to the New Hampshire line. Wakefield is just east of where Interstate 95 and 93 meet north of Boston.

The standoff began around 2 a.m. when police noticed two cars pulled over on I-95 with hazard lights on after they had apparently run out of fuel, authorities said at a Saturday press briefing.

Between eight to 10 men were clad in military-style gear with long guns and pistols, Mass State Police Col. Christopher Mason said. He added that they were headed to Maine from Rhode Island for “training.”

The men refused to put down their weapons or comply with authorities’ orders, claiming to be from a group “that does not recognize our laws” before taking off into a wooded area, police said.

Officials used negotiators to interact with the other suspects.

Mason said the “self-professed leader” of the group wanted it to be known that they are not anti-government.

“I think the investigation that follows from this interaction will provide us more insight into what their motivation, what their ideology is,” Mason said.

Mason said he had no knowledge of the group, but it was not unusual for the state police to encounter people who have “sovereign citizen ideology,” although he did not know if the people involved in the Wakefield standoff was a part of that.

“We train to those encounters,” Mason said. “We very much understand, I guess, the philosophy that underlies that mindset.”

Residents in Wakefield and Reading near where the standoff is taking place have been asked to shelter in place.

Wakefield police said in its statement that no threats had been made but the men were considered armed and dangerous.