A look at Prattsville, 10 years after Irene

Just before Tropical Storm Irene reached the Catskill Mountains a decade ago, people were already preparing for an "act of god."

Over the centuries, Prattsville had flooded many times before. On the morning of August 28, 2011, the Schoharie Creek rushed aimlessly, angrily, and mercilessly through the Northern Catskills.

"It was awful. It was a disaster," said Carole Cangelosi of Prattsville.

In just a matter of an hour, the fast moving, muddy creek rose seven feet. "It was the roaring Mississippi still going on in here," said Peggy Young of Prattsville.

By the time the creek crested at 24 feet, a historic catastrophe was assured. "It just rained and rained heavy. It just never stopped." said Jim Dymond. 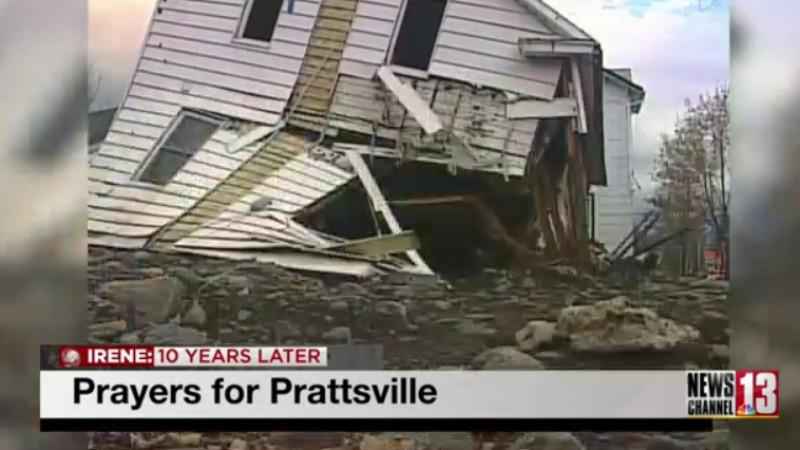 Even before the water receded, devastation was evident, rampant, and widespread.

"It seemed like a battle had happened," Cangelosi explained.

For many Prattsville residents that day, it was a battle to stay alive. "The water came up tremendously fast. We were stuck in that barn," said Young.

To escape the rising flood waters, Peggy Young, her husband Jim, two sons, and three dogs wound up on the barn roof for three hours.

In another part of town, while surveying the damage, Carole Cangelosi noticed something unsettling. "The next day, people were walking around like Zombies, and I decided they needed to eat," she said.

So Carole began cooking, handing out hot dogs, and cold drinks and other food for hours upon hours, every day, for weeks, until people came to her house. "I had people on my front porch, my back porch, my backyard in and out all day long, for the first full week," she said.

Ed Rivera came to Prattsville after the flood, joining up with the Hunterfield Christian Training Center, helping total strangers get back on their feet. His community service in his adopted hometown continues to this day.

"I think one of the keys in disaster relief is just being with people, letting them tell you their story, and then being able to just stand with them. When they gotta look at the mess, when they clean up the mess. It’s just important to be a friend," Rivera said.

To hear from more people in the community, click on Dan Levy’s report.