COHOES – According to neighbors, the old house at the end of Dartmouth Street in Cohoes has been abandoned and dilapidated for years. As far as anyone knows, no one has lived inside in recent memory, although in recent weeks, many neighbors have spotted furry intruders seemingly sunbathing themselves on the roof.

"I know there’s at least two," said Ted Conlon, who lives just down the street. "I’ve seen two at once."

After Conlon and other snapped pictures of the foxes, and posted them on social media, they became the talk of the neighborhood.

"One of the foxes was looking out the window as if he was standing guard," Conlon stated. "And he’s looking right at me, and then he comes out the window and does his thing with the other one."

Although cute and cuddly, for many neighbors, the freeloading foxes have become a reason for critter concern. 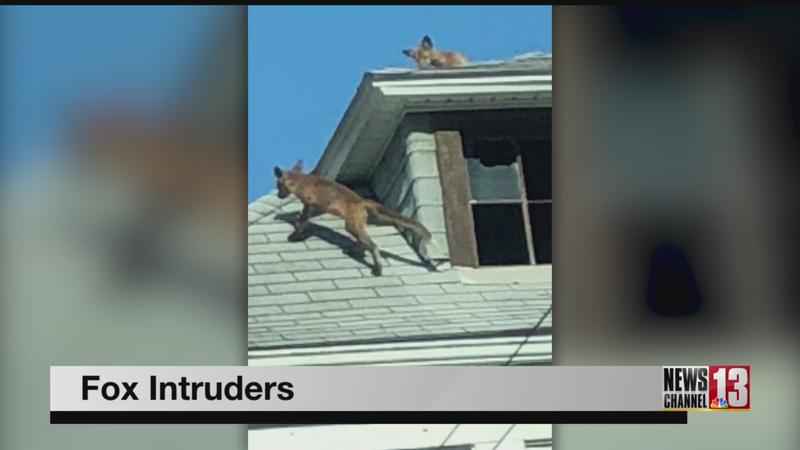 "I have a small dog," said Scott Cavosie. "I’m sure she could be taken out by a fox, and my neighbors have dogs too. That’s my main concern."

Even though no one knows for sure how long the foxy critters have been living there, it’s no secret how they’ve been getting in and out of the house so easily. There are broken windows and wide open doors all around the building.

Keeler says the city has been aware of tax related issues with the property for more than a decade. News Channel 13 has learned the owner, Mary Krutka died in 2014 and the county says property taxes haven’t been paid since 2015.

On Thursday afternoon, Keeler says a wildlife rehabilitator set three traps on the overgrown property, each of them baited with a half rack of ribs.

"We’ve had a general fox problem since spring," Keeler acknowledged. "About a half mile further up the hill in Cohoes, we live trapped three foxes that were up on top of peoples’ cars and up on their porches and super friendly, not threatening anybody, but they were too comfortable with humans."

Late Thursday night, the traps remained empty, and the foxes remained on the lam.