News Channel 13 is hearing from people in the Capital Region fighting back against the Supreme Court’s decision. We also heard from an organization that fought to overturn Roe V. Wade.

Just a day after the Supreme Court announced they were overturning Roe V. Wade, people across New York are rallying voicing their frustration. A large crowd came to 7th Street park in Hudson.

"I didn’t even go to a demonstration during the Vietnam War, but this is the first time. Because we have a minority government that has managed to take over the Supreme Court and just doing something reprehensible," said John Bendel, an abortion rights advocate.

The rally in Hudson was organized by the Columbia County Democrats. Sam Hodge is the chair of the party. He says there is concern now that the Supreme Court could strip away other rights. 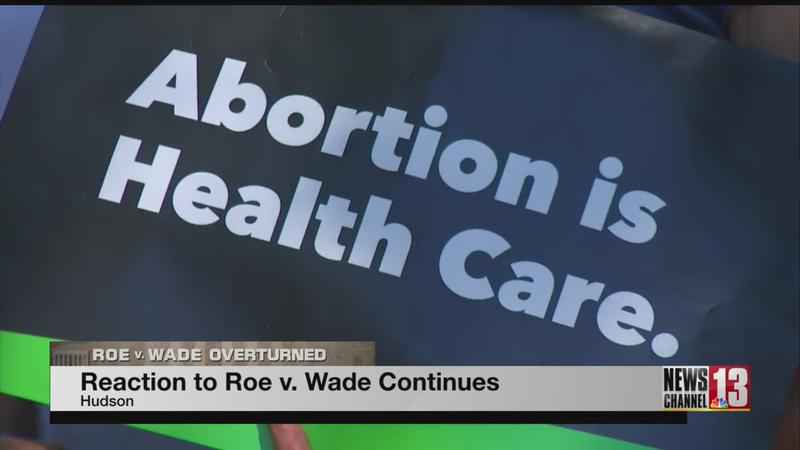 "The right to have access to contraception, the rights to have same sex persons to have intimate relationships, the right to same sex marriage. These are now all at risk, said Hodge.

"I’m 50 years old and this is the first time I’m addressing the idea that a right of mine is taken away," said Berne Bendel, an abortion rights advocate.

However, there are some people who are celebrating the decision. Lori Kehoe is a spokeswoman for New York State Right to Life. She believes the Supreme Court did the right thing.

"Delight and tears and happiness and joy and almost disbelief. We have been at this for so long," said Kehoe.

Kehoe is pro life and doesn’t believe this decision takes away women’s rights.

"I stand on the shoulders on the great women and feminists who come before me, who do not believe that in order to be fully feminists, you need to step over the body of our children. So, this has nothing to do with taking away women’s rights," said Kehoe.

Abortions are protected in New York because the state passed the Reproductive Health Act in 2019. Planned Parenthood officials believe women from other states may come to New York to seek an abortion.