ALBANY – Even in the days leading up to Halloween, they’re talking Christmas in Albany County.

The Adopt-a-Family program is an annual tradition, making sure children have presents to open and there’s plenty of joy to go around, especially in some tough pandemic times.

"I think it’s even more important now to give," said donor Peter Scotto. "We have these kids missing out on school, missing out on play, just going out and playing with someone, the development that they’re losing."

Albany County is putting out the call to help. 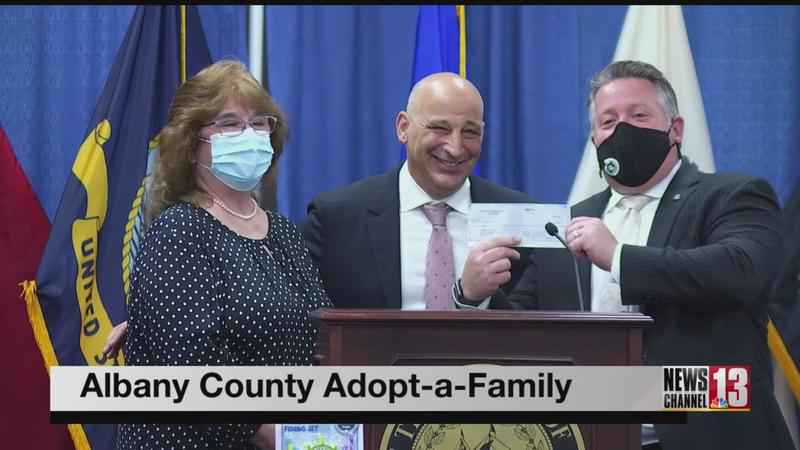 If more people are home, that might mean collection bins don’t get as many donations.

"And if people aren’t coming back into the workplace, or they’re at a reduced 50% for safety measures, we lose the people there that would normally donate to these kids," said Albany County Executive Dan McCoy.

Albany County had to do some out-of-the-box thinking for its outreach last year, setting up a table at a mall, and sending out a box truck to collect other donations.

Tuesday, Peter Scotto, president of Advanced Therapy, donated $10,000 to the program for the second year in a row. The company provides different special education services to school districts.

"I just thought it would be nice," said Scotto. "I know how that feels– I’m not going out, I can’t play with my friends, I can’t run the streets and do some of the great things, I’ve been down and out for God knows how long, as a kid. And now I get shorted by Santa? That’s a tough one."

"We were just talking about that this morning," said Commissioner Moira Manning of the Albany County Department for Children, Youth and Families. "We’re actually going to start purchasing now, especially with the generous donation from Mr. Scotto, we then have the ability to do so."