Albany remains under state of emergency after violent weekend 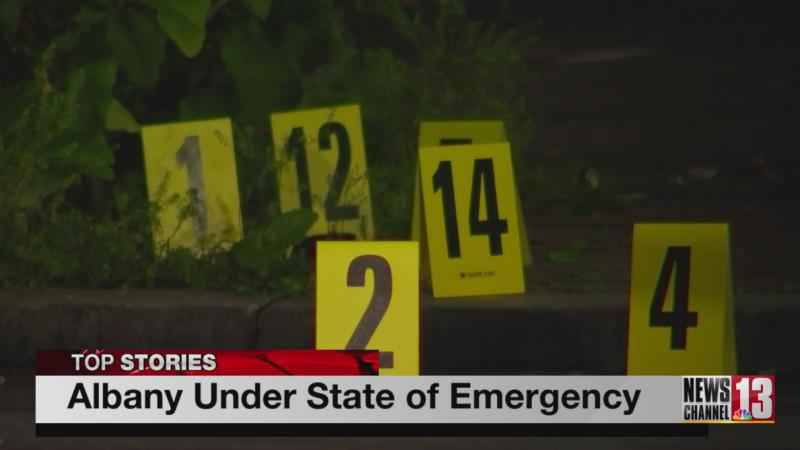 The city of Albany is under a state of emergency because of an uptick in gun violence.

Officers say they were notified by Albany Medical Center around 2 a.m. that a 16-year-old had walked into the emergency room after being shot in the arm. The teen told officers he had been shot on Washington Avenue, near Quail Street, by an unknown person.

On Sunday, officers responded to a shooting on Clinton Avenue around 9 p.m. Officers say a man was shot in the arms, and he is expected to recover.

Earlier on Sunday, police were called for shots fired in the area of Third Street, near Ontario Street. Investigators say they were not aware of any injuries or victims.

Albany police are also now investigating two separate shootings that happened over the weekend as homicides.

On Friday, Mayor Sheehan and Chief Hawkins declared a state of emergency in response to gun violence. Mayor Sheehan says the city has seen a 22% increase of shots fired incidents in the last 28 days compared to the same time last year.

Under the state of emergency declaration, the city can declare a business a public safety nuisance without having to give notice or hold a public hearing.

Chief Hawkins declared Café Hollywood a public safety nuisance on Friday, and ordered the restaurant to close indefinitely. Mayor Sheehan says preliminary investigations showed a connection between the restaurant and Friday’s shooting. She says the police department has also received more than 20 calls regarding the business in recent months.

Jason Pierce, president of the Albany Restaurant Association, took to Facebook and agreed with the city’s decision. Pierce says that the restaurant’s management "has exhibited an ongoing pattern of general disregard for the safety of their staff, patrons, and the neighborhood for some time now."