PRATTSVILLE – Over the centuries, Prattsville had flooded many times before, but on the morning of August 28, 2011, the Schoharie Creek rushed aimlessly, angrily, and mercilessly through the northern Catskills with such fury and ferocity, an aquatic apocalypse seemed likely.

"It was awful," said Carole Cangelosi, "It was a disaster."

In just a matter of one hour, the fast moving, muddy creek rose seven feet.

"It was the roaring Mississippi," insisted Peggy Young.

By the time the creek crested at 24 feet, an historic catastrophe was assured. 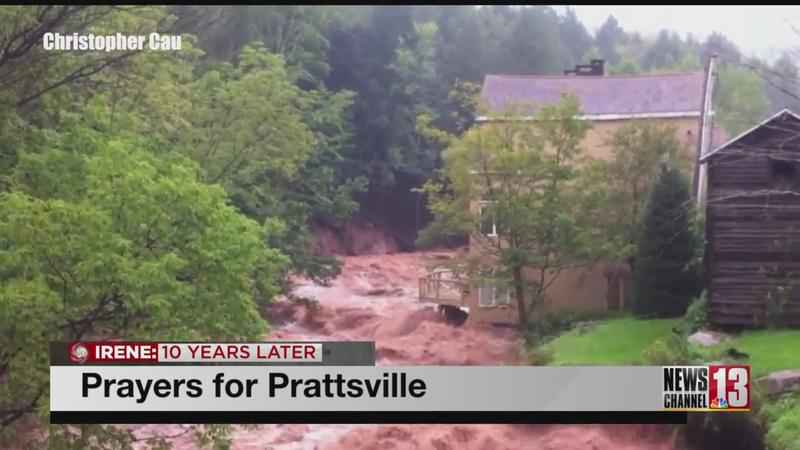 Even before the water receded, devastation was evident, rampant, and widespread.

"It seems like a battle had happened," Young stated.

For many Prattsville residents that day, it was a battle to stay alive.

"The water came up tremendously fast," Young recalled, "We were stuck in that barn."

To escape the rising flood waters, Peggy Young, her husband Jim, their two sons, and three dogs wound up stranded on their barn roof for three hours.

"I would say, maybe at one time on the roof when I saw my sons turning gray, that I began to think this isn’t good," Young recalled.

In another part of town, while surveying the damage, Carole Cangelosi noticed something unsettling.

"The next day, people were walking around like zombies and I decided they need to eat," Cangelosi said.

And so Carole began cooking, handing out hot dogs, and cold drinks, and other food for hours upon hours, every day, for weeks, until people came to her house.

"I had people on my front porch, my back porch, my backyard, in and out all day long, for the first full week," Cangelosi recollected, "And I did nothing but cook."

Ed Rivera came to Prattsville after the flood, joining up with the Hunterfield Christian Training Center, helping total strangers get back on their feet. His community service in his adopted hometown continues to this day.

"I think one of the keys in disaster relief is just being with people, letting them tell you their story, and then being able to just stand with them," Rivera, a Long Island native," stated, "When they have to look at the mess, when they clean up the mess, it’s just important to be a friend."

Crystal Soule-Cornell is now looking forward to reopening the Pratt Museum on Main Street this week for the first time since the flood, proud of the new community room there that has become a repository for flood photographs and artifacts.

"We all came together after the flood as a community," Soule-Cornell says, "Ten years later we’re stronger than we were, and we’re definitely resilient."

Meanwhile, Peggy Young says the high water mark in her dining room will remain as a reminder of the cataclysmic event that changed her world forever.

"I have a tremendous faith," Young says, "My faith is that God has put us here, and we’re here to stay until God moves us on."

For 188 years, townsfolk have honored the legacy of their founder, former Congressman Zadock Pratt, and from this day forward, they’ll also always remember the great flood of 2011. And they’ll also gather each year to celebrate the miracle that their community is still afloat.